Perry Impresses In Big Win Over Basha on MLK Holiday 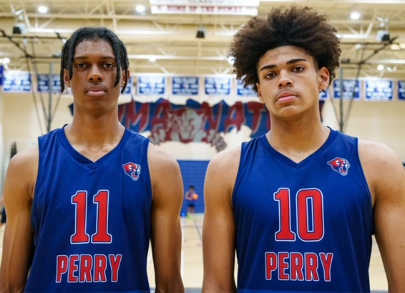 It was a special day as our nation and state celebrated the life and tremendous efforts for racial equality of Dr. Martin Luther King Jr. While it was a day off for the country, it was definitely a day on for top-rated high school basketball match-ups around the country. There was no bigger projected match-up in Arizona high school basketball than #1 ranked Perry High School and #2 ranked Basha High School, as the featured contest between these two teams filled the gymnasium at Basha - selling out the gymnasium (30) minutes before the game began on Monday evening.

Perry (19-1) came into Monday evening's contest very focused, after only having one loss on the season to Pinnacle High School, in what was a major upset win. Basha (19-2) had just received their first loss of the high school season on Friday @ Brophy Prep in narrow fashion, 51-50, and were looking to get back to their winning ways with a big win over the state's top team. While top teams can often times get surprised by their opposition, especially on the road, Basha had Perry's full attention on Monday evening and would not be surprised. With a featured top-ranking in the state on the line in this game, Perry would come out well prepared for a big performance in front of a large crowd on the MLK Holiday evening.

Sporting the state's top two overall prospects in the AIA ranks in 6-foot-8 stellar senior guard Cody Williams and 6-foot-8 sophomore stud Koa Peat, Perry has the amazing star power of two future McDonald's All-Americans - something never seen before on the Arizona hardwood. It is always a joy to watch these two phenoms perform together, and we must savor it while we have the opportunity to watch these two play together for another month and a half.

Basha would have their work cut out for them, as they looked to slow these two down without the services of starting point guard, 5-foot-10 junior Izaih Johnson, who would suffer an injury in the first couple minutes of the contest. Without the services of Johnson, Basha would look to manufacture their offense through adjustments made by talented Head Coach Mike Grothaus and his staff. Gifted 5-foot-11 freshman guard Mason Magee would take over the point position, but would earn two quick fouls early in the game - sending him to the bench early in the first half.

Perry would quickly build a 7-2 lead after a nice three-pointer from 6-foot-4 sophomore D'Andre Harrison, after a nice assist from Koa Peat. With 2:30 remaining in the first period, Cody Williams would deflect a pass and travel the length of the floor for a nice one-handed dunk - giving Perry the 16-10 lead over Basha. Just before the end of the first period, Williams would receive an outlet pass for another nice two-handed throw down over a defender on the break - putting Perry ahead 22-13 with less than a minute to play in the period. A strong basket inside the paint by Peat would allow Perry to take a 26-13 lead over Basha at the end of the first period.

In the second quarter, Cody Williams would convert a nice fadeaway jumper on the baseline over a defender, then collect an offensive rebound and put-back for himself to push Perry ahead 43-24 late in the second period. A mid-range jumper from Koa Peat would help Perry take a big 45-28 lead into the half. Perry would never look back from there.

In the second half, Perry would continue to roll. A strong two-handed dunk down the lane over a Basha defender by Koa Peat, after being fouled, would tell the story for the evening, as the play would bring excitement from the crowd and the Perry faithful in attendance. After a deep three-pointer at the buzzer by sharp shooting 5-foot-11 junior guard Barron Silsby, Perry would jump out to a big 73-46 lead after three quarters. Perry would then cruise to the 84-62 road victory.

Perry still has a tough schedule ahead of them, as they will face Brophy Prep twice before the end to the regular season, and will see Basha again at the end of this month (1/31).