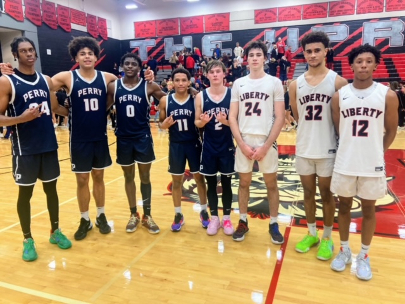 Tuesday evening saw possibly the state's top two AIA programs go at it in fine fashion, and early in the high school season - making for an excellent match-up for the state's basketball enthusiasts to enjoy. This was a state playoff level match-up between #1 ranked Perry High School and a surging Liberty High School team, that is very game and prepared to make a state title run this season. Perry is the state's top AIA program - coming off winning a 6A State Championship last season, and also winning the Welcome To The Jungle Gilbert Holiday Hoops Tournament last week. Liberty is a lock to compete for a 6A State Championship this season, and they are also coming off winning the exciting Hoopsgiving Tournament at Sunnyslope High School last week as well - making for a superb early-season match-up.

Perry High School (5-0) is off to an excellent start this season, as this year's group is super loaded with talent, of course, led by the play of stars, 6-foot-8 senior guard Cody Williams (University of Colorado signee) and 6-foot-8 sophomore forward Koa Peat. This exciting duo returns this season a year older, and much more battle tested after a State Championship run last season, and both amazing prospects coming off big spring and summers with their respective club programs. The difference for this year's Perry team, is that their supporting cast is also much more experienced, battle tested and knows their roles, which leads to a much more balanced team that is also much more efficient in their play. Players have stepped up in the process, and the overall guard play for Perry is now top-notch, and will only continue to improve this high school season.

Liberty High School (4-1) is a serious state title contender, as focused and hard-working Head Coach Mark Wood and his very experienced staff has their best team ever, led by the strong play of 6-foot-5 senior forward Caden Hunter (Pima Junior College signee). The team has an excellent supporting cast of guards and forwards that includes athletic 6-foot-6 senior Ky Green and promising 6-foot-8 junior forward Ring Nyeri, as well as the sharp-shooting of 6-foot senior guard Davis Hester and 6-foot-4 senior Brennan Neal. This team is talented and game for any match-up that comes their way this high school season.

In front of a large crowd of fans on Tuesday evening, Liberty was more than up for the challenge, as visiting Perry High School would have their hands full the entire game. Perry would come out immediately to take a fast 7-1 lead in the early start to the game, behind a focused Koa Peat, who came out on fire - finishing with a two-handed dunk down the lane, a tap in on a missed shot attempt by a teammate and a 3-pointer from the corner. After back-to-back transition layups by Cody Williams, and then a monster dunk by Williams over a Liberty defender, Perry would hold on to a 15-10 lead with 2:40 left to play in the first period.

Liberty would overcome the Perry onslaught and remain tough, behind strong play from Caden Hunter, as Perry would finish the first quarter with a mere two-point lead, 22-20.

Ring Nyeri would fight hard inside against the tall Perry lineup - finishing a nice two handed dunk in traffic to tie the game at 22 all early in the second period, but Perry would jump back out in the lead, 27-22, after a three-pointer in transition by 5-foot-11 junior guard Barron Silsby, who is on another level this high school season. Perry would close out the first half with some strong play, as another Koa Peat dunk over a defender, after a nice assist from Cody Williams, then another basket inside by Peat, another basket in the paint by Peat, a strong driving basket on the baseline from Williams, another three-pointer by Silsby and a three-pointer from Perry 5-foot-10 sophomore guard Nolan Brown - giving Perry a nice 44-36 lead at halftime over Liberty.

Koa Peat would then receive his fourth foul with 4:35 remaining in the third period, and go to the bench.

After another nice three-pointer in transition from Hester, a strong driving layup from Neal, and then another long three-pointer from Neal in transition, and then a steal and a short layup by 5-foot-10 senior guard Nick Zambito, and Liberty would jump back into the lead, 59-57, with 1:48 left to play in the third period, but Perry would continue to fight as well, and take a narrow 63-62 lead into the fourth period.

Koa Peat would return in the game with 6:04 left to play in the contest. A three-pointer from Silsby and then an offensive foul taken by Silsby, would fire up the Perry Pumas. After a strong dunk on the baseline by 6-foot-4 senior Ben Egbo, a driving left-handed layup from Silsby, a break-away two-handed dunk by Cody Williams, another basket by Williams, and then another transition layup from Silsby and Perry would finally pull away late - winning the game 93-79.

This game was much closer than the final score, as these two teams gave us a great game and a playoff atmosphere - proving that this will be an amazing season for both high school programs. Cody Williams would finish with a game-high 24 points, 11 rebounds, 8 assists and 4 steals, while Koa Peat would finish with a game-high 24 points, 9 rebounds and 3 steals. Liberty was led by Caden Hunter and Davis Hester, who both finished with a team-high 23 big points in the loss.

This was a dog fight and Perry HS Head Coach Sam Duane Jr. can be very happy with his terrific guard play that has shown up this season for the Pumas, led by Barron Silsby and Nolan Brown. The Pumas will also get another terrific guard at mid-season, when Adonis Lafleur becomes eligible (AIA Transfer rules). The guard play for Perry is now at another level, and the play of Silsby, especially in this contest and during the early season, has Puma faithful excited for another 6A State Title run, but Liberty will definitely be in the conversation all season long.