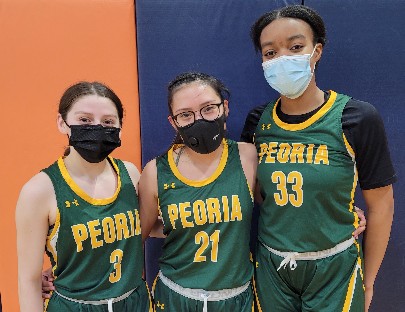 The AIA’s condensed season has it’s benefits, as there are more games scheduled on holidays and Saturdays. The scheduling has allowed the Arizona Preps' staff to cover multiple games throughout the week. It definitely has been a treat thus far, with a lot of parity at nearly most of the games we have attended.

The GC3 Arizona Preps Girl’s Game of the Week was between the Lady Broncos of Poston Butte and the Lady Panthers of Peoria. The game left me at the edge of my seat, since it was so close.

Poston Butte led most of the game, with Poston Butte’s Coach Savannah Bix looking to press and push the tempo early. Poston Butte looked like they had a deeper roster opposed to Peoria. Poston was led by 5-foot-4 junior guard Sierra Badger and 5-foot-6 sophomore guard Adriana Bachman. It seems like those two guards facilitate the offense, by creating scoring options for themselves or their teammates. 5-foot-6 sophomore wing Kilah Fowler complimented Badger’s and Bachman’s play by stepping up to be the third scoring option.

Peoria displayed a big three of their own with 5-foot-11 sophomore forward Britany Kogbara, 5-foot-2 junior guard Gabby Gutierrez and 5-foot-3 Samantha Thomas. Peoria’s Head Coach Robbie Harper did a fantastic job breaking the press by spacing the court and putting Kogbara in the middle. Once they were able to break the press, it opened up opportunities for high-percentage shots.

Both teams played hard with Peoria hitting a floater with less than :10 seconds in the game to seal the deal for the Lady Panthers.

Here were the prospects who stood out to me the most:

2022 Poston Butte 5-4 G Sierra Badger - A downhill-type scorer with great slashing ability. She is aggressive on both ends of the floor, has a high energy motor with the ability to hit shots from the mid-range and perimeter. Confident to step up to take and convert clutch shots. College coaches take note!

2023 Poston Butte 5-6 F Kilah Fowler - Shows nice scoring ability from the mid-range with a nice shooting stroke. An aggressive on the ball defender and compliments her teammates well.

2023 Peoria F 5-11 Brittany Kogbara - Younger sister of top prospect Kevin Kogbara (Dream City Christian). A big presence on the inside with elite rebounding ability. Runs the floor well for her size and showed great stamina, as she didn’t come out of the game, but still produced. She has a high ceiling.

2022 Peoria G 5-2 Gabby Gutierrez - Displayed nice finishing ability and shooting range. A great motor on both ends of the floor. She is very quick and fills transition lanes well.

2022 Peoria G 5-3 Samantha Thomas - Another nice combo-guard who has the ability to score inside, mid-range and the perimeter. She also hustles for rebounds on both ends of the floor.

A nice game to check out some hidden gems. These prospects possess the talent to play at the college level. With all these prospects being underclassmen, I think their stock can rise with continued development. We look forward to continue coverage of Arizona Girls' Basketball.