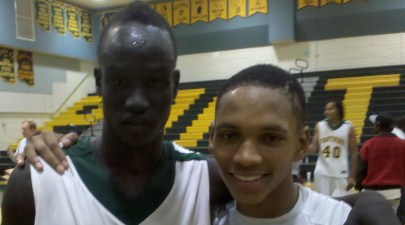 With both teams of Panthers looking to be suffering from early nerves, the game would turn in a sloppy first quarter. While Peoria would score each of their first quarter field goals in the paint, Amphitheater would take a 9-8 lead after the first period.

With 4:56 left to play in the half, Amphitheater would take a 17-10 lead after a length of the court pass from 6-foot-4 senior guard/forward Tim Derksen (University of San Francisco signee) to 5-foot-9 senior Tony Lillard, and then a nice driving layup from Derksen.

With Peoria's gifted and high-scoring 5-foot-11 senior point guard Dewayne Russell (USC commit) struggling from the field, Amphi would increase their lead to an impressive 26-12 lead after another length of the court pass from Derksen to Lillard for another layup.

Amphi would take a comfortable 26-12 lead into halftime. With Amphi giving up interior size to Peoria, Peoria's 6-foot-11 senior post Stephen Hadley would be a non-factor in the game's first half.

Peoria would come out in the second half looking to get back in the game. Peoria would go on a quick 7-0 run to start the third, before Amphi's Derksen would complete a three-point play inside on a reverse layup to put Amphi ahead 29-19 with 5 minutes to play in the quarter.

With increased intensity and better defensive pressure, Peoria would climb back to within 4 points with just over 2 minutes to play in the period, after a nice floater from Dewayne Russell.

But a poised Amphi team would take a 35-29 lead after three quarters, behind consecutive field goals inside from 6-foot-6, 225 pound post Charles Benson.

A nice spin move in traffic from Dewayne Russell with 5:33 left to play in the game, would narrow the margin for Peoria, 37-35, before a three-point play from Amphi's 6-foot senior combo-guard Ryan Farhat would put his team back up 40-35.

But Peoria would take the game's momentum late in the fourth, and get the lead down to a one-point game, 40-39, after consecutive field goals from Russell. With 2:25 left to play in the game, Peoria's 6-foot-4 senior guard/forward Lawrence Pierce would steal the basketball and travel the length of the court for a layup - giving Peoria their first lead of the game, 41-40.

Two free throws from Pierce would give give Peoria a 43-42 lead with 1:37 remainning. Pierce would earn another trip to the charity stripe with 1:12 left to go. Pierce would again hit both free throws to put Peoria ahead 45-42, their biggest advantage of the game and heading into the final minute of play.

Benson would score inside for Amphi, on an assist from Derksen to make the score 45-44 with :56 seconds remainning.

After being fouled, Peoria's Russell would go to the free throw line - connecting on both attempts and giving Peoria a 47-44 lead with :52 seconds to play.

After a foul called on Lawrence Pierce, his fifth of the game, Amphi's Benson would miss both free throw attempts, before Amphi's Derksen would get fouled on a drive to the basket. Derksen would calmly hit both free throws to make it a one-point game, 47-46 - Peoria lead.

With 27.5 seconds to play, Peoria's 5-foot-10 senior guard Chris Chapman would get fouled and go to the free throw line. Chapman would miss the first free throw, but connect on the second to put Peoria ahead 48-46.

With 16.4 seconds remainning, Amphi woiuld clear it out and allow their star guard, Tim Derksen, to make a play. Derksen would come through as he has his entire high school career - scoring on a drive to the basket over a defender and tieing the game at 48.

Peoria would return the favor. With the last shot of the game, they would put the basketball in the hands of their star - Dewayne Russell. With everyone on the floor looking for Russell to create a shot for himself, the future USC Trojan would get into the lane and dish the basketball to an open man, 6-foot-2 senior Sam Engler for the go-ahead basket.

Amphi would inbound the basketball but fail to get a shot off as the buzzer would sound - giving Peoria the sweet state championship as a large crowd of fans would rush the floor.

"We got one, we got one," said Peoria's Stephen Hadley after his team's big win.

An emotional Mike Serwa, Peoria's second-year head coach stated after the game, "They mean everything to me (Peoria team). "I've seen these kids grow up."

A very special moment for a group of kids at Peoria HS that have been through a lot on and off the basketball court.

The game ended an amazing high school career for Amphi's Tim Derksen, a four-year starter for Amphi. Derksen led Amphitheater to an eye-popping 116-6 record over his four years at the program.