Peoria Comes From Behind To Defeat Greenway 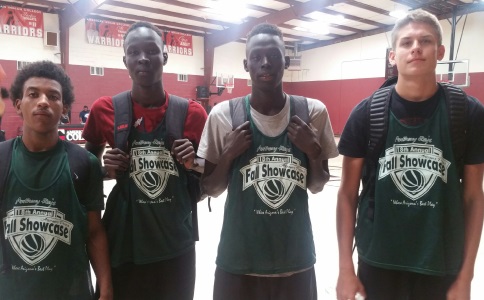 Peoria High School (8-10) has been up and down all season long, and their performance on Tuesday evening proved to be a game much like the season.  While having a very young team this season, with only four seniors on their roster, and one of their top prospects ineligible by the AIA, this team has struggled  to consistently win ball games.  On Tuesday evening, they would get their chance to overcome a previous loss this season.

Previously this season, Peoria faced rival Greenway High School, only to lose on the road, 49-42.  On Tuesday evening, they would look to avenge their previous loss on the season to Greenway.  But Peoria would get down big to Greenway in the game's first half, as Greenway (9-8) would take a 30-19 lead into halftime.

The fourth period would belong to Peoria, as head coach Will Roberts would ignite his team defensively and switch things to a full-court press.  While Greenway would look poised enough to handle the defensive pressure, with Shavers still on the bench, they would rush shots and turnover the basketball just enough for Peoria to get back in it.

Shaver would return with 5 minutes left to play, but Peoria had the momentum.  Peoria 5-foot-10 freshman guard Isaac Monroe would knock down several three-pointers in the second half to pull Peoria close.  Down by a mere 2 points with 4 minutes left to play, Peoria would tie the game at 45 all after a driving basket by 6-foot-1 junior guard Elijah Neal.  With 1:45 left to play, a mid-range jumper by Neal would push Peoria ahead 49 to 45.

With the game's momentum in their full grasp, Peoria would walk away with the victory, 54-49, and avenging their earlier season loss.

Peoria, while struggling to win ball games this season, is loaded with some young talent.  This is definitely a team to watch for the future - trust me.

Notes:  Peoria High School's gifted 6-foot-7 sophomore post prospect John Price has been ineligible all season long, due to AIA transfer rules.  The absence of Price to this year's Peoria HS team has been immense, as he is a big-time talent for the future.

Price is a good-sized, lengthy stretch 4-man prospect with very good upside for the future, suggesting that he will only continue to grow physically and should develop over time into a serious division-I prospect.  He will need to continue to work very hard, but, if he does, this young man has the potential to open many eyes.  Price is a taller post prospect that can score inside and out, and runs the floor, while being able to finish inside the paint.  As a college prospect, Price resembles that of a smaller Michael Humphrey (Stanford University), as he runs the floor in a very similar manner and has long legs and good feet.  He also has good hands and is a good finisher around the basket, keeping the basketball up high on rebounds.  He is an active rebounder and also has solid low-post moves, although he is still raw and needs continued development as a scorer, but he should progress nicely over time.

Price is a very valuable factor in Peoria's success over the next two years, and has the potential to make this team exceptional over time.

Peoria HS 6-foot-6 junior forward Lahad Adeim is a nice talent among the 2018 class, and is one of the state's most unheralded prospects.  A high energy forward prospect that runs the floor with vigor and plays both ends of the floor hard, a two-way player.  While Adeim still needs work offensively to round out his game, he is a low to mid-major division-I prospect now, as a result of his length, athleticism and work ethic.  A definite player to watch over the next year in the state.

Greenway HS 6-foot-3 senior guard Scotty Shaver has really improved over the last year.  A sharp-shooting guard prospect that is capable of playing both guard positions, Shaver is a good prospect for a smaller college program, as this young man absolutely loves the game.  The son of an accomplished coach, Shaver pushes the ball up the floor and enjoys finding the open man on the floor.  He also is a good scorer and shooter of the basketball.  Also has excellent toughness.  Currently has an offer from Sagu University and North Central.

Greenway HS 6-foot-4 senior forward Jared Vigil is another good-looking prospect.  A senior, Vigil is a very active forward prospect that plays all frontcourt positions for Greenway.  He is a very good prospect for a smaller college program, as he moves very well without the basketball and knows how to play the game.  Also a good rebounder and finisher.  A solid prospect.

Greenway HS 6-foot-8 senior post Donte Barge is a seldom utilized post prospect for Greenway, due to a coaching decision, but this young man produces when he is on the floor.  A big body that is capable of running the floor and is a solid finisher in the post.  Barge is a good rebounder on both ends and has a lot of sheer talent, if he decides to put it together.  Very lazy physically, Barge needs improved work ethic to reach his potential as a college prospect.  But with hard work and dedication to his game, this young man is a player.  A nice talent that just needs to believe in himself.