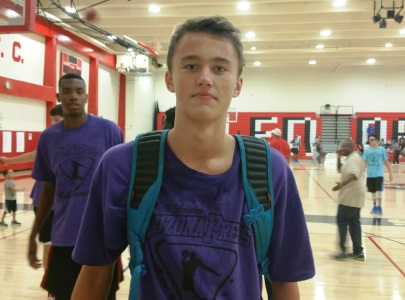 Pinnacle High School's rising young talent, 6-foot-8 sophomore forward prospect Patrick Kelly, is among the top young prospects in the state, but he has decided to change paths for himself, and will be leaving the state of Arizona this summer to return to the East Coast.

Patrick and his mother Kari Kelly moved to the state of Arizona just three years ago from North Carolina, and now they will be returning back to the East Coast this summer, and moving to the state of Virginia where a lot of their family resides.

After two good seasons at Pinnacle HS, while playing for terrific head coach Charlie Wilde, Patrick will now move to Virginia and finish his high school career at the Virginia Episcopal School (VES) and play for head coach Curtis Staples.  Located in Lynchburg, Virginia and founded in 1916, the Virginia Episcopal School is a private boarding and day school that is very successful in the state.  Staples is the all-time leading three-pont shooter at the University of Virginia.

This will be a big loss for Pinnacle HS, as Kelly is a major bright spot for the school's athletic future.  Espcially after playing so well this spring with many of his school teammates, while playing for head coach and strong leader Mark Brown and his Arizona Power-Prospects 16U team, a team loaded and filled with some of Arizona's top 2018, 2019 and 2020 prospects.  The Arizona Power-Prospects have been very good this spring and recently won the 16U tournament crown at this year's West Coast Elite Spring Classic in Las Vegas, Nevada.

Led by the strong leadership of Mark Brown, a former basketball standout at Michigan State and a terrific coach of youth basketball, this very talented group of sophomores and freshmen would defeat some very talented competition in Vegas to win it all and take home the 16U crown.

A big reason for the team's success was the strong play of Patrick Kelly.  Kelly played very strong inside and out and came up big in the post for the team.  As a result of Kelly's strong play and promise for the future, he has generated significant recruiting interest - earning two different scholarship offers as a result.

This week, Kelly received scholarship offers from Cal State Northridge and also Florida Gulf Coast.  At the Virginia school, Kelly plans to reclassify as a 2019 prospect, his accurate school grade and level.  As a 2019 prospect, Kelly immediately will become a hot college prospect and recruit - possessing very good potential for the future and an advanced level of skillsets and size for the class.

Kelly has grown a great deal over the last three years, since I first saw him.  He has grown a tremendous deal physically, as he now possesses a much stronger physical frame with broad shoulders, excellent length and superb athleticism for his age.  While he should only continue to develop much more over the next 2-3 years of high school, Kelly has a very promising future ahead of him, although the state of Arizona will be very sad to see him leave our state.

After suffering an injury as a freshman, Kelly spent almost a year working hard in daily workouts to rebuild his body - a practice that has benefited him nicely in his development.  After moving to Arizona, Kelly would suffer a broken bone in his foot, causing him to rehab the injury.  Kelly worked very hard while working with a personal trainer at Scottsdale's AMP Sports Performance.  Kelly worked daily on his lateral quickness and overall speed and agility during workouts daily at the facility.  Kelly has now grown physically and should eventually grow to 6-foot-9 in heigth - making him a versatile stretch four-man over time.  As he continues to mature physically, he will only become much stronger, quicker and more athletic.  His best best attribute right now is his tremendous work ethic and love and passion for the game of basketball.  Kelly's desire to be a player is tremendous and will carry him to becoming a nice prospect in the future, especially since he is nowhere near what he will become over time.

Kelly is the son of former NFL player Pat Kelly, who was a 6-foot-8 tight end for the Denver Broncos (NFL).  His father passed away when Kelly was young.

The state of Arizona will miss Kelly a great deal, but the promise for this young man is immense.  I will be keeping a close eye on him for the future, and will continue to follow his progress as a student-athlete very closely - bringing you any updates as they continue to develop.