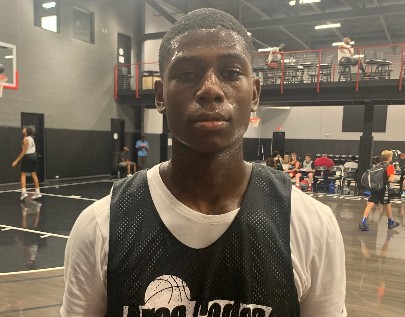 One of the elite overall prospects still uncommitted in Arizona's 2022 class is Brophy Prep's 6-foot-4 senior guard Patrick Chew. With many other top-rated prospects in the class currently off the recruiting board, Chew is set to return for his senior season, which will be his most important season to date. This season Chew will look to lead a very talented Brophy Prep team in the state's tough 6A Division, and also look to gain more recruiting interest for himself, and ultimately make his college decision this spring.

Chew and his Brophy teammates had a strong season last year - finishing with a 17-6 overall record on the season, and falling to eventual 6A State Champion Sunnyslope High School (74-67) in the 6A State Semi-Finals. Brophy returns a very experienced and talented lineup this high school season, and definitely has what it takes to win it all. Led by Chew, this year's Brophy team is among the most talented teams in the state.

Chew is set to have the biggest and most important high school season of his young career, as he will look to lead this talented Brophy group, and he will also look to raise his college recruitment in preparation for a big spring decision. After a strong sophomore season where he helped lead Brophy to a state playoff berth, Chew returned as a juniro last season - leading Brophy to a 6A State Semi-Final finish. This season, Chew will look to lead Brophy Prep to a 6A State Title, and also become one of the elite overall talents in the state.

At 6-4 in height, Chew is a bigger combo-guard prospect that enjoys playing on or off the basketball. He is a play-maker with the ball in his hands and makes plays for himself and others. He enjoys having the basketball in his hands and making plays off the dribble in the half-court set, in the open floor or while slashing to the basket, where he is a good finisher in traffic. Chew looks to make players around him better and get his team into the offensive set, but he also likes to score the basketball when off the ball or as needed, as well. He is a very good ball handler and passer that sees the floor, and also pushes the basketball. He has developed his perimeter shooting over the last two seasons, and now shoots with better consistency from longer ranges, which sets up his drives to the basket. He has a good mid-range game, and does not mind physical contact when getting into the lane against bigger defenders, where he uses a variety of floaters to finish around the basket.

Chew is also an active rebounder from the guard position. He is an excellent defender, his best asset. Chew plays passing lanes well and is an excellent one-on-one defender that takes pride in his defense, and enjoys accepting challenges on the court - guarding the opposing team's best player without permission. A potential lock-down defender over time - an aspect of his game that will benefit him nicely as a player.

Currently, Chew has received offers from UTEP, Cleveland State and Kennesaw State and he is also receiving strong interest from such schools as Pepperdine, Colorado State, Princeton, Grand Canyon, Rice, East Carolina, UNC-Charlotte, Hawaii, Air Force, UC-Riverside, South Dakota and Austin Peay, just to name a few. Chew should see his recruitment soar as a senior, now that college programs are beginning to settle down from the COVID-pandemic that impacted their recruitment a year ago.

With many of the top guard prospects in the 2022 Class now off the board during the early signing period, Patrick Chew is definitely one of the elite guard prospects still on the board, and he will have a big senior season for a loaded Brophy team that could win it all this season. I look forward to watching him this high school season, as he is set to have a big year.

Chew is also the son of one of the top recruiters in the country, long-time successful college coach Isaac Chew, and assistant coach at the University of New Mexico.