Parker Anderson Coming Into His Own 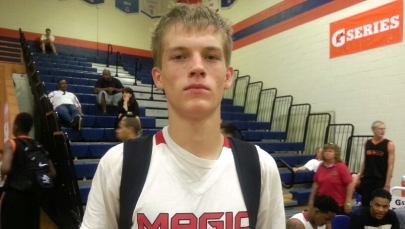 One player that is beginning to come into his own this high school season is Queen Creek High School's talented and athletically gifted 6-foot-4 senior guard/forward Parker Anderson.  In fact, Anderson came into his own on Tuesday evening in his team's narrow loss to top-ranked Gilbert High School.  In the defeat, Anderson emerged as one of the state's top sleeper prospects and proved that he is worthy of serious recruiting attention as a result.

Anderson, who burst on to the Arizona basketball scene this past spring and summer while playing for the Arizona Magic club program, proved that he was a serious athletic talent with an ability to play well above the rim.  It was still unproven just how skilled a player he was after his off-season performances, but, on Tuesday evening in his team's narrow loss, Anderson proved just how much he has developed as a player.  Anderson connected on 5 three-pointers in the loss, and finished with a team-high 20 points in the game.  4 of Anderson's 5 three-pointers in the game did not hit the rim, proving that he has really worked hard on his ability to shoot the basketball as of late.

"I have a basketball hoop at my house and I just practice shooting on it all the time," Anderson told me after his team's loss on Tuesday evening.

While competing on the club circuit, Anderson showed glimpses of a player that had the potential to play college basketball at some level.  It is now quickly apparent that he may be worthy of division-I level college recruitment, and would definitely be an excellent prospect for a nice division-II program.

While observing Anderson in club competition, he showed very good toughness and a high level of confidence in the games I saw him play in.  He has a nice lengthy body with a very good motor and also possesses deceiving athleticism, which allows him to make plays in transition and while slashing to the basket.

Anderson has now shown a nice ability to score the basketball with excellent range.  He has a wide variety of offensive moves, and an ability to make plays off the dribble.  His shot selection can be questionable at times, but he has very good range on his perimeter shot.  He is an active rebounder on both ends of the floor, and competes hard on the defensive end.  As he becomes more disciplined in his overall approach to the game, he will see major improvement in his overall attack on the basketball court.

Anderson's best attribute is his tremendous length of body and athleticism, which allows him to make highlight plays at any point in the basketball game- capable of throwing it down on a defender whenever he attacks the rim.  Anderson has the physical tools to become an excellent player over time, as he possesses tremendous upside and a high ceiling.  His intangibles are glaring – toughness, confidence and a high motor.

This young man is definitely one to watch for the future, as he seems to get better each time I see him play.  I will continue to keep a close eye on Parker Anderson this season, as he could develop into a very intriguing college prospect in the spring.