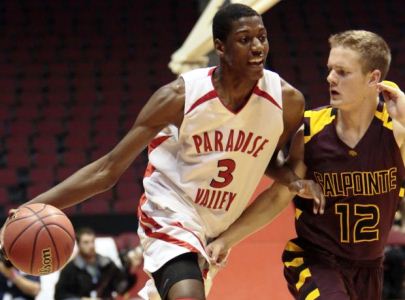 The Paradise Valley Trojans and the Salpointe Catholic Lancers were the teams squaring off in the Divison-II State Championship game.  Paradise Valley was led by 6-foot-6 senior forward Paul Watson (Fresno State signee) and Salpointe was led by Jaylyn Juan.  This was set to be a good game.Salpointe came out scoring the first six points of the game, before Cedric Jacobsjones made a layup to put PV on the board.  Once the Trojans scored their first points, they went on a run to force a Salpointe timeout with one and a half minutes left, and Paradise Valley leading 12-8.

Out of the timeout, Paradise Valley finished off a 10-0 run to end the first quarter.  The Trojans led the Lancers 16-8 after 8 minutes of action.

The second quarter started and Salpointe continued to struggle offensively.  A Paul Watson and-1, two minutes into the quarter, gave the Trojans a 10-point lead.  They had all the momentum and rode it to give themselves a 25-10 lead - capping off a 17-4 run and forcing a Salpointe timeout midway through the second quarter.  Paradise Valley seemed to have full control of the game, when a 6-0 Salpointe run to end the first half made it easier for the Lancers going into halftime, down 25-16.

At the half, Paul Watson and Ryan Finley each scored 7 points for Paradise Valley, while Anthony Walker collected 6 rebounds off the bench.  Salpointe was led by Cameron Denson who had 6 points, while Ryan Callaghan scored 4 and collected 5 rebounds.

The Lancers would need to come out with some energy in the second half, in order to mount a comeback.  Both teams came out trading buckets in the second half, until a stop and bucket by Salpointe made it a 29-24 game with 3 minutes left.  However, Paradise Valley answered and made it a 34-27 lead after three quarters.

Paradise Valley was one quarter away from the championship, as long as they could finish strong and hold on.

Salpointe's defense stepped up in the fourth, forcing turnovers and giving them a chance to get back in the game.  A steal and layup by Cameron Denson made it a 36-32 game with 4 minutes left, however Ryan Finley would answer with and and-1 layup.

Despite Salpointe's defense, they missed key free throws and Paradise Valley would hang on to win the Division-II State Championship by a final score of 45-39.

Paradise Valley was led by Paul Watson's 20 points and 5 rebounds.  Ryan Finley also chipped in 13 for the Trojans.