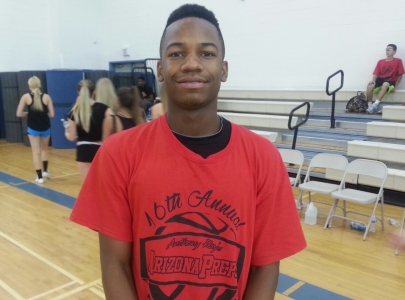 On Saturday I was able to catch several games at this year's Paradise Valley Invitational, and came away impressed with the play of numerous players in action.

Here are the players that I observed on Saturday that caught my attention, and will look to become definite sleeper prospects in the state - players that you may not know much about that deserve some serious attention (in no particular order) . . .

- Coby was terrific on Saturday - leading his high school program to the tournament championship with 28 points in the final game.  Coby did it all - scoring from deep with unlimited range on his shot, which made him very difficult to defend for opposing guards.  He also has very good length of body, which allows him to score effectively from mid-range and at the basket on drives and mid-range pull-ups.  No player in the state's 2015 class has improved more over the last year than this young man.  He is a serious college prospect now, and has the ability to only continue to get better, since he still looks very young physically.  He is a very good ball handler and passer with very good court vision.  Capable of also playing the point position as needed.  Comes from a very rich basketball family and bloodlines.  A nice sleeper prospect that opitimizes the term.

- Wilson is the best sleeper prospect in Arizona's 2015 senior class that no one seems to know about.  Cesar Chavez HS head coach Gary Lee seems to limit this young man's playing time, but when he is on the floor - watch out.  Wilson has worked very hard on his skill level and is capable of trying to do too much at times, but he has the ability to do it all.  He can handle the basketball like a guard, has a nice shooting stroke with good range and is a highlight reel dunker with big-time length and athleticism.  Wilson has really developed over the past couple years, and now will make some program very happy.  Looks to be head the junior college route after high school, but if he can get it done academically in the juco ranks, this young man is a serious division-I talent for the future.

- Jones is a wide-bodied combo-forward prospect that will play each front court position for Paradise Valley head coach Mark MacGowan this high school season.  He will see his time as a small forward in the collegiate ranks, but is able to defend players bigger than him as a result of his physical strength.  He can score inside and out and is a definite mis-match for most opposing players and teams.  Capable of knocking down three-pointers consistently or scoring in the post with his back to the basket, or while facing it.  Gets to the free throw line, but would like to see him do more of that as a player - especially since he is so difficult to defend in high school.  Very skilled.  Very good ball handler and passer. Would be an excellent prospect for a smaller college program.

- Goolsby is another athletically gifted wing prospect that plays both forward positions for Cesar Chavez.  He also has really developed over the past two years, and now is beginning to come into his own as a player.  Goolsby is a long, rangy and athletic prospect that has a high motor and very good bounce off the floor.  He has a very quick second jump, which allows him to be an excellent offensive rebounder.  He is at his best running the floor and finishing on the break, or slashing to the basket in the halfcourt set.  Still needs to develop a consistent perimeter jump shot to maximize his play on the court.  An OK handler and passer.  Has major upside.  A year of post-graduate prep school or a stint in junior college would do him great, otherwise he would be an excellent prospect for a smaller college program.

- DeWeerdt is a nice sleeper prospect that knows how to play the game and looks the part.  He has good size and athleticism and also has a nice overall skill level, which allows him to be very productive on the basketball court.  Seems to do everything well.  DeWeerdt is an active rebounder that rebounds bigger than his size suggests, and he is also able to defend players bigger than him or also defend wings on the perimeter.  A good scorer in transition and also in the half court set.  A good shooter, wbut he will need to become more consistent from longer ranges to raise his overall stock as a college prospect.  A good prospect that would do very well after a stint in the junior college ranks.

- Bidese is an strong and athletic post player that plays with very good intensity and aggression.  He is very active on the glass on both ends of the floor and is also a strong finisher in the post.  He rebounds outside of his area and plays inspired basketball.  Also a good shotblocker for his size.  Runs the floor hard and also sets good screens.  Plays without the basketball.  A good sleeper prospect for a smaller college program.

- Burke is an excellent shooting guard prospect with a quick release on his shot and unlimited range.  He is capable of making shots from anywhere on the floor and makes a good percentage from the field.  In such an uptempo style of play imposed by veteran and legendary head coach Jerry Conner, Burke will fill it up this season.  He is super thin physically and will need to get physically stronger and also add some serious size to his thin frame over time to defend opposing guards at his position in college.  A good ball handler and passer that sees the floor.  Good defender with a high motor and good lateral quickness.

- Amiri (pictured) was the top overall performer on the day that I watched - scoring a game-high 32 points in his team's win over a young Desert Ridge team.  Amiri is the top overall pure point guard prospect in the 2016 class, but he is still a sleeper prospect, since college coaches really have not seen him play yet.  Amiri is a big-time ball handler with a very slick handle of the basketball, and an ability to get anywhere he wants to on the floor.  He has never seen a shot he doesn't like, but he is capable of making them.  He may over dribble at times, but you don't mind because he can make plays at any time in the offense.  I really enjoy watching this young man play, and he is deserving of some serious college recruitment.  Will have a big junior season after averaging 20+ points per/game as a sophomore.

- Woods is quickly becoming one of the elite guard prospects in the state.  Known as “Boo Boo" by his friends and family, this young man is a superior guard talent with an excellent feel for the game, and strong perimeter skills, allowing him to go anywhere he wants to on the floor - similar to Amiri Chukwuemeka.  Rarely do you find guard prospects like this in the state of Arizona, but this young man has been well-coached and developed since an early age.  Woods is now regarded by our staff as one of the top guard prospects in Arizona’s 2017 class, after his recent performances as of late.  He has a bright future ahead of him.

- This young man is a nice guard prospect for the future and did a very good job guarding Perry's Markus Howard in the championship game on Saturday evening.  Tshaka is a heady point guard prospect with a nice handle of the basketball and a very good feel for the game.  Pushes the basketball up the floor.  Applys good defensive pressure on the ball.  He enjoys gettign his teammates involved and is already a floor general at a young age.  Is coming off a very good spring and summer also where he led his club program, Team Bibby 15U, to several tournament championships.  A nice guard prospect for the future, and a good looking kid.

- Allen is the younger brother of current Desert Ridge player Teddy Allen, and this younger Allen will definitely become the better of the two over time.  Timmy is an athletic talent with a very good skill level and a high motor.  He can score from many different places on the floor, and also has a nice overall feel for the game.  He shoots it well from the perimeter, which is why I believe this young man's future will be big time.  He has a long, rangy body which suggests that he will continue to grow a great deal oveer the next few years.  A nice young talent.