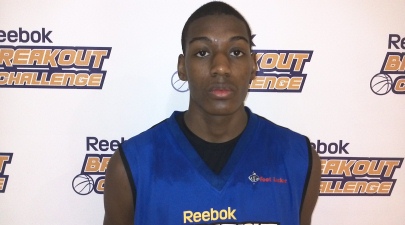 Desert Ridge took a quick 10-point lead and never looked back.  Desert Ridge defeated Cactus Shadows 65 to 47.  Desert Ridge was led by 6-foot-1 junior point guard Hunter Thomas.  6-foot-5 senior power forward Nick Allen was too much for Cactus with his strength and defense in the paint.

Hunter Thomas was special tonight, as he could do anything he wanted to with his elite shooting and setting up his teammates. Hunter had 21 points and atleast 7 assists - finding players in stride, on the run from full court and off the dribble in the half-court setting up and finding his cutters. He is able to blow by his man with his crossover and finish with a lay-up or a smooth floater.

The second game of the night was Sandra Day O’Connor (SDO) vs Desert Mountain (DM).  The game was over immediately as Desert Mountain took control early with the amazing passing and defense of 5-foot-10 junior point guard Rolando Rhymes.  Desert Mountain won 58 to 27, and it wasn’t even that close since both teams emptied their benches in the fourth quarter.

Rolando was finding open shooters early and often.  DM hit atleast 10 3-pointers on the night with 6-foot-4 junior shooting guard Remy Smith, 6-foot-5 senior Diego Magana and 6-foot-3 senior shooting guard Will Goff all with (3) three-pointers each. 6-foot-5 junior post Mark Andrews was also a force inside for rebounding, defense and had many lay-ups.  Andrews will be very important for them moving forward.  Senior guard Grant Carter and junior point guard Gino Littles also contributed in this blow-out win.  Big man, 6-foot-5 junior power forward Jordan Higgins came in for Andrews and did some dirty work inside the paint to help out.

Senior forwards Cody March and Theo Igwe for SDO, did as much as they could to help their team out in the loss.

Perry HS 5-foot-10 junior point guard Jordan Howard of Perry dominated the game with 25 points, 4 rebounds and 5 assists.  Howard was scoring at all 3-levels and got inside the paint after he blew by his man and found his teammates, as the defense came over to him to help out.  He has a legit first step and killer crossover, and can pull-up extremely fast to make mid-range or 3-point shots.

6-foot-6 junior forward Geoffrey Vredevoogd was very active inside the paint to help out Howard.  Also, sophomore 5-foot-9 point guard Taliand Gaitlin was extremely fast with the ball and knows how to push the ball quickly up the court and find running teammates.

Horizon was paced by senior forwards Sean Deacon, Austin West and Jordan Esser all chipping in.  Horizon is a very balanced team with as many as 6 players that are capable of reaching double-figures on any given night.

The fourth and final game of the night was Washington against tournament host Paradise Valley HS.  After a very slow first half for both teams, 25-20, Paradise Valley would blow out Washington in the third quarter - led by 6-foot-6 senior forward Paul Watson (Fresno State signee), who had 17 points in the quarter and 27 points overall.  Watson can score anyway he wants - in the post, from mid-range or a 3-point shot.

PV won 64 to 43 with many contributions from senior forwards Ryan Finley, Anthony Walker and Connor Euting.

Washington had 6-foot-5 junior forward Jacob Bowman do as well as he could to contain Watson, and also scored 16 points himself along the way.  He is very long defender and score in many ways.  He seems to like the mid-range shot best, but can shoot the 3 or take you off the bounce and make a lay-up.