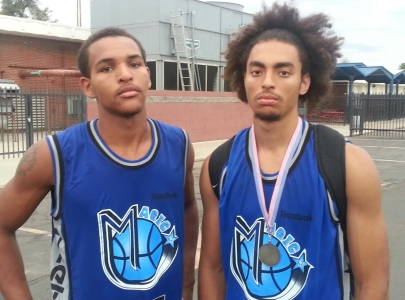 The Pangos Sweet 16 NCAA-certified basketball event came to a close on Sunday with many of the teams from this year's event already heading back home.  However there were still many teams in participation on Sunday - competing for tournament titles and others simply still playing, as a result of strong performances throughout the event.  Our Arizona Preps staff stayed for the conclusion of the tournament - making for a long drive home late at night, but it was well-worth the effort.

On Sunday, we would get to watch Corona Del Sol High School's superb rising sophomore guard Alex Barcello lead his Team Bayless 16U squad to the tournament championship in the top 16U Division of the tournament.  While the team was without the services of fellow star rising sophomore guard Marcus Shavers (Adidas Top 100), Barcello more than picked up the slack with his ability to run a team and almost score at will.  The developing superstar prospect showed why he is considered among the elite prospects in Arizona already.

Barcello plays on a Team Bayless team that is a member of the Compton Magic organization.  The team is also sponsored by Arizona native and NBA star guard Jerryd Bayless, who graduated from legendary St. Mary's High School in  Phoenix, Arizona.  This team has all California residents, except for Alex Barcello and Marcus Shavers.  The team cruised through this year's tournament - winning several close games, including a first-round buzzer beater victory over a talented Arizona Magic 16U team.  In the win, Barcello finished with 21 points and also won the game on a strong driving layup.

This young man has star potential and could become the top 2017 prospect over time - competing with Perry High School's phenom guard Markus Howard.  Only time will continue to tell.

The Arizona Magic Elite 17U team finished off an excellent performance in this year's tournament, as every player on the team raised their recruiting stock over the weekend.  The team finished with a 3-1 record over the weekend in the invite-only division - a division where every game was a physical war.  The were loads of college coaches at every game for the Magic, as each of their opponents were top-rated teams also filled with many division-I prospects.  The team was led by the strong play of guards 6-foot-3 rising senior Sammy Thompkins and 6-foot-4 prep guard Lyrik Shreiner.

The two guards competed at a high level throughout the tournament and led the team in scoring in each game.  Thompkins was a warrior in the event.  After coming right from this year's loaded Reebok Breakout Camp, Thompkins would get right back to work - playing strong offensively and showing extreme toughness on the defensive end.  Thompkins would score with consistency from long range and also take the ball strong to the basket, amidst strong defensive efforts.  He also dislocated his wrist in the event then popped it back into place and finished out the tournament.  Wow!  Not only did he play again, he played great - leading his team to a strong performance.  Thompkins earned a scholarship offer from Rice University during the event.

Shreiner proved why is considered a high major guard in the event, scoring at a high rate and making the game look easy.  Shreiner has improved a great deal since the spring when he struggled to run a team mightily.  He is now showing excellent leadership qualities and finding the open player on the floor, while making better decisions in his shot selection as well.  Shreiner is now being sought after hard by Saint Mary's College and Grand Canyon University.  Memphis, SMU and Colorado have also shown interest as of late.

6-foot-9 prep post Andre Adams is headed to IMG Academy (FL) this fall, but this past weekend he was showing the improvement that has him now drawing rave reviews from loads of college programs across the country.  Adams played as hard as we have seen him play and was extremely productive throughout the weekend.  Adams shot the basketball with precision from mid-range and showed a nice, soft touch when left unguarded.  Adams also rebounded outside of his area and blocked or change shots at a high rate.  Arizona State is now making a hard push at the talented post prospect.

The team also received strong performances from 6-foot-7 rising senior forward Nick Allen, who played tough and physical all weekend.  Allen really raised eyebrows from many colleges with his work ethic and skill level.  Allen is also very athletic for his size and looks to be the whole package.  Empire HS 6-foot-8 rising senior forward Deion James came directly from this year's exciting Reebok Breakout Camp to play in the event, and injured his knee in the second game of the tournament.  James played very well in limited action.  Catalina Foothills HS 6-foot-3 rising senior guard Dakota Kordsiemon came up big all weekend for this team, and provided excellent depth and scoring.  Dakota knocked down the open three-pointer with regularity and also rebounded hard on both ends of the floor.  Scored the game winning basket for his team on Saturday evening, in a buzzer-beating tap in.  While it is still unclear which level Dakota will land at, he really help his cause this weekend.

Independence HS 6-foot-4 rising senior guard Kaveon Moore generated interest from Gonzaga University with his tough play.  Westview HS 6-foot-5 unsigned senior forward Isaiah Bellamy also played very strong in the event and came up big for his team - locking up defensively and rebounding strong.  Bellamy also hit some big shots throughout the weekend.  Central Arizona JC looks to be the leader for him now.  Millennium 5-foot-7 rising senior point guard Brian Brooks ran the show for his team and knocked down big shots throughout the weekend.  This Magic team is primed to continue their strong play throughout the club season and should fair well against any level of competition.

The Arizona Magic Elite 16U team also had a great event, and lost in the Consolation Championship of the tournament on Sunday morning.  The team seem to run out of gas on Sunday after competing very hard throughout the tournament.  Basha HS 6-foot-10 rising junior forward Devin Kirby solidified himself as our premier 2016 prospect with a terrific performance in the event, while Gilbert HS 6-foot-6 rising junior Chris Bowling and Dysart HS 6-foot-10 rising junior post Malik Ondigo both continued their strong play.  Bowling proved why he is considered among the best wing prospects in the West for the class, and Ondigo emerged as a strong post prospect in the class in the West.  The team received a strong team effort as well from it's supporting cast, as Mesa Mountain View HS 6-foot-5 rising junior forward Zane Jowaiszas was the glue for the team that helped them win.  Copper Canyon's rising sophomore guard Trevon McCray and rising junior guard Terry Gates both played well throughout the event for this team, and played tough defensively.  This group has excellent potential for the future and should only get better over the next two years as these kids mature.

The Arizona Aces 17U team coached by Aaron Windler would win the Premier Division Tournament Championship in this year's event.  Since they were not in the top bracket of the event the team would miss out the many college coaches in attendance at Cabrillo HS, but they would do another excellent job this club season of finishing strong.  Coached by Windler, a former high school head coach with college coaching experience, this team is well coached and competes extremely hard.  The team would represent Arizona nicely in this year's event as they received top performances from Mason Zwillinger,  Jordan Lee, Avonte Nelms, Andrew Reed,  Luke Johnson,  Connor Nichols, Carter Aby and Mike Mellinger.  Congratulations to this team on a big tournament championship, after already winning a local event earlier in the season.