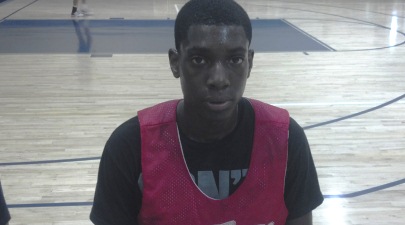 This last weekend kicked off the start of which looks to be a very talent laden West Coast club basketball season.  While the Nike EYBL and Double Pump Hoop Fest opened up in Los Angeles, California, I happened to watch a majority of the top kids on the West Coast and beyond in fabulous Las Vegas, Nevada at the Pangos Spring Spectacular hosted by Dino Trigonis and Bishop Gorman High School, and other locations.  I was shocked at how high of a level these kids were playing at so early in the club season.

Of the talented kids I personally watched, here are my four top performers, regardless of High school class, for the weekend ...

I had the chance to watch Perkins three times this weekend and he performed at a very high level every single time out - regardless of who he was playing and what the score was.  He has a quick, “Austin Rivers-like” release on his jumper, which can extend all the way out to NBA range.  He knocks them down at a high clip, whether he is open or even with a hand in his face.  He uses his body very well to bully off defenders and can also be shifty in the lane to get around bigger, more athletic players. What sets him apart from other players in his class is his ability to see plays before they happen.  He always has his head up and can lead players to score easy baskets, due to his outstanding court vision and hitting his teammates before the defense has the ability to set up.  I feel he is one of the best point guards on the West Coast, and I hope I get a chance to see him compete again.  Josh currently has offers from Arizona, Gonzaga, New Mexico, Colorado, UCLA and many others, and is receiving interest from Duke University.

I watched the very talented Belmont Shore team, coached by Dino Trigonis, several times on the weekend and I would be very surprised if there was a underclassmen team on the West Coast who can beat these guys.  Even with such big names as Tyler Dorsey (2015), Daniel Hamilton (2014) and freshman phenom Vance Jackson (2016), the unsigned senior Darien Williams stood out the most in my eyes, and I feel he is one of the best unsigned seniors on the West Coast.  While the underclassmen have the flash and potential, Darien has the college-ready game right now.  He used his huge frame to dominate his opponents on the offensive and defensive boards, which resulted in easy put-backs and dunks for him on the offensive end, and his defensive boards led to more easy points on the fast break for his teammates.  He also has a great touch shooting the basketball, which can extend out to the 3-point arc.  He also has the ability to handle the ball and can put it on the deck and get by defenders, if he is given the chance to do so.  Darien does not have any d-1 offers now, but I could see him picking up many of them this summer.  Academics will cause him to head the junior college route first though.

While Williams of Belmont Shore has speed and power, TK Edogi has the straight up athleticism and quick twitch around the basket that I didn’t really see from any other big man this weekend.  In the games I watched him, he dunked on anyone who was in his way and grabbed rebounds over his helpless defenders that attempted to box him out or contain him on the glass.  He also showed great improvement on his shot selection from the first tournament I watched him in.  He hit almost every 15-and-out jump-shot that was given to him by the defense, and would get to the rim and score if his defenders closed out on him too hard. TK is a full academic qualifier and holds offers from Western Michigan, Rider, Binghamton and Portland State, and is receiving heavy interest from CSU Northridge, CSU Fullerton, Hawaii, Tulsa and many others.

I only had the chance to see Chapman play one time this weekend, but he was clearly one, if not the most dominant player at the event that I saw all weekend long.  Chapman does everything that a big man needs to do in order for his team to win, as they did. He was relentless around the basket - getting second and third put-back attempts on shots by just out-hustling his opponents, and scoring or getting fouled on a majority of them.  His great post moves, body control, and length, quite frankly, made it very hard for anyone to stop him once he got the ball where he wanted it - inside 15 feet.  On top of this, he has a clean shot all the way out to the 3-point line, and can draw out the opposing big man - making it even harder for the other team.  He also had several block shots on the defensive end that resulted in multiple fast-break points and three point shots for his teammates.  Chapman has high major offers from Arizona, Arizona State, UCLA, Utah, BYU, Colorado and many other top programs.