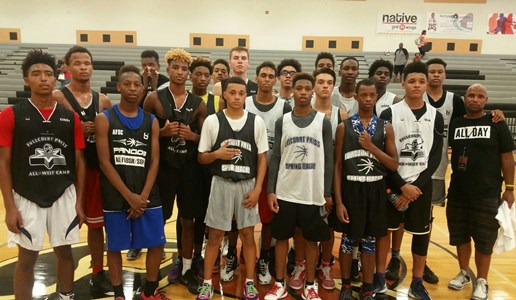 The Pangos Arizona Showcase took place this weekend at Desert Edge High School in the west valley, and brought together the best collection of college basketball scouts/media the state of Arizona has seen this year.

Numerous top performers from the state missed out on this event, as there were a large list of top-rated prospects in the state not in attendance on the day.  The prospects that did participate benefited a great deal from the high level of exposure they received from playing in front of the industry's top scouts.

Here are the top individual performers from the day's action that I was able to observe (In no particular order) . . .

Shadd turned in his best performance after a lackluster summer, where he failed to consistently get a lot done on the offensive end of the floor.  Still very raw offnesively, Shadd played inspired basketball in an event that lacked many players his size.  As a result, Shadd played well above the rim and finished plays strong at the rim over defenders.  He competed hard for rebounds and blocked shots, while running the floor hard.  While Shadd is still young for his class, a post grad year would really benefit him, but he plans to make a decision this fall.

Thomas continues to develop nicely and he had his best performance in some time on Saturday, proving that he is a serious division-I prospect for the future.  A very skilled 3/4 prospect with a nice overall skill level, Thomas seldomly takes bad shots and shoots a high percentage from the inside the paint and from the wing position.  A very crafty player, Thomas has a variety of offensive moves and jump hooks and floaters, while also possessing a nice shooting stroke with range.  He is an excellent offensive rebounder and also a very good shotblocker.  Has a bright future ahead of him.  Thomas just recently decided to attend Hillcrest Prep Academy this fall.

Ondigo is coming off a big spring and summer performance for himself where he earned several high major offers.  As a result, Ondigo played uninspired basketball on the day, but still was effective.  Ondigo finished well inside the paint, but was unable to really get it going from the perimeter like he had all summer.  Now that Ondigo has declared he will be attending a prep school for this  academic year (Worchester Prep (MA), it will be good to see Ondigo develop over the next year.  Ondigo still plans to schedule visits before making his college decision.  It is just still unclear whether he will make those visits for the fall or the spring.

This developing post talent has nice size and is mobile.  Bennett is a long and skilled post prospect with a soft touch from the perimeter.  He has has a nice overall feel for the game, and looks to have glaring potential for the future.  He runs the floor and finishes strong around the rim.  He is also an active rebounder and shotblocker - two areas of his game which he should blossom in over time.  While he is still very thin physically and needs a lot of maturity to realize his true potential as a player, this young man has very good potential for the future.  Runs the floor.

Gueye had his best performance of his young career - finishing with a game-high 13 points in the Top 20 All-Star game.  Gueye is a very thin wing prospect with a solid left-handing shooting stroke.  While he still needs work from longer ranges, he is a slasher and finisher at this point in his young career.  A good defender with nice length of body.  Needs to get stronger physically, especially in his lower body to maximize his potential as a player.  Could really benefit from a post graduate year.

Meadows is an aggressive point guard prospect with a knack for scoring the basketball.  He enjoys creating scoring opportunities for himself off the dribble and attacks the basket, where he is a good finisher.  Also has a good shooting stroke with range, although his shot was not falling on the day much from the perimeter.  An excellent on the ball defender that has good quickness and anticipation.  Pushes the ball up the floor.  A good lead guard prospect.

Tabon is a serious talent for the future with a serious upside as a player.  Possessing very good length of body and athleticism, Tabon is a sure-fire college prospect for the future.  He is very thin physically but has a nice ability to slash and finish in the lane.  He also is developing a solid shot from the perimeter.  As he matures physically, and if he will continue to work hard, he should become one of the state's better 2019 prospects.

Rollins is a nice looking prospect that has a good looking body with nice length and athleticism.  Still soft physically, Rollins has the potential to develop with hard work into a serious college prospect, although he may take him longer to develop to his true potential.  He is a good slasher and open court player.  Hit a big shot to win the 2018 all-star game.  Has a soft perimeter shooting stroke, but still needs to add consistency from longer ranges.  A solid rebounder.  Has the potential to become a very good defender over time.  Good looking prospect with upside.

Jones was one of the top surprise performers from the event.  A very athletic guard prospect, Jones has nice length on his athletic frame, which allows him to make plays well above the rim in transition.  A good slasher and finisher in the open floor.  A good scorer.  Active rebounder and defender that plays passing lanes.  Has good overall potential.

Thurman was an unknown prospect before the event, but made a strong case for himself with a nice effort in the event.  While he does not look like much, this young man can play the game at a nice level and has a variety of offensive skillsets that make him very difficult to guard.  An excellent ball handler and creator off the dribble, Thurman was able to get anywhere he wanted to on the floor, and also finished strong at the basket.  Shot the ball very well from the perimeter with range.  A good passer.  A definite sleeper guard prospect in the 2018 class.