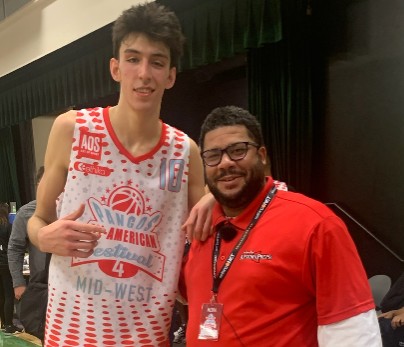 The Pangos All-American Festival recently took place on the campus of AZ Compass Prep in Chandler, Arizona. Organized again by top-rated West Coast scout Dinos Trigonis, who has almost become a resident in the state lately with his numerous exposure events, this installment of the prestigious annual Pangos event was different, as it included one main court for maximum exposure and was hosted in Arizona, rather than the normal home of Los Angeles, California. Due to the COVID-19 pandemic, many California events have been moved to the state by Trigonis and other West Coast scouts, and the addition of this year's Pangos All-American event took it to another level, as the best prospects in America put on a show for the large number of scouts and media in attendance.

The event was closed to the fans and public, but included a nice number of scouts and media throughout the weekend - everyone looking to see the nation's best prospects compete at a high level for the championship of the event. This was the first event of it's kind nationally, as we have not seen such elite top-rated national talent take the floor together, since before the pandemic began. Trigonis made it happen though in fine fashion, as he put together an elite group of prospects at a time when many prospects are not even playing. With such elite national talents as the nation's premier overall prospect, Minnehaha HS (MN) 7-foot senior Chet Holmgren and the top prospect in the West, O'Dea HS (WA) 6-foot-10 senior Paolo Banchero (Duke signee) both taking the floor, it made for some serious basketball action.

This event was won by the South, coached by new Cesar Chavez High School Head Coach Joe Espocito, a legendary high school coach nationally from New York, and led by the play of AZ Compass star guard 6-foot-4 senior guard Ty Ty Washington (Creighton signee), who formerly played for Cesar Chavez HS. While many of the prospects in this event were committed/signed prospects, here are my evaluations of those top-rated 2021 prospects in the event that are still uncommitted and unsigned to college programs (In no particular order) . . .

Holmgren is as good a prospect as I have ever seen. It is unreal that he is a senior and is still uncommitted, which will make for a very interesting spring as college programs look to land this unicorn prospect. A super long and rangy post prospect that plays all over the floor, and has excellent versatility and a skillset that allows him to play inside and out. Turned in his best performance of his career in the Pangos event, as he scored the basketball from everywhere on the floor, and absolutely shut down the paint - blocking a total of (25) shots in two games in the event. Shot the basketball with superb consistency from longer ranges, and while being defended closely by defenders. Handles the basketball like a guard, and is among the best passers I have ever seen - regardless of position. A future NBA Lottery pick and, most likely, the #1 pick in the future NBA Draft. Definitely the top overall performer from the event. Currently considering Gonzaga, Michigan, North Carolina, Memphis, Ohio State, Georgetown and Minnesota.

Foster is a superb talent and currently ranked as a Top 10 national prospect by ESPN for America's 2021 Class. Foster has a strong and big-body frame that allows him to out muscle his defenders around the basket, although he likes to play on the perimeter still a little too much, and bails out defenders. When he focuses on scoring around the basket, he is almost unstoppable in the high school or prep ranks. Injured his lip in the first game, which caused him to miss much of the event, but not before he showcased his tremendous individual talent - dunking over a defender. A big-time low post scorer with an ability to make shots from the perimeter, although he needs to become more consistent from longer ranges. An active rebounder and shotblocker. Runs the floor hard and is an excellent finisher. A future NBA first-round draft pick. Has narrowed down his list of interested college programs down to (4) schools - Florida State, Georgia, Western Illinois and Grambling State.

A human highlight reel dunker with excellent length and explosive athleticism. Has a long and rangy physical frame with better than a 7-foot wingspan, that allows him to play well above the rim. One of the most explosive dunkers I have ever seen. Runs the floor hard and is an excellent dunker in transition and in traffic. Excellent slasher and finisher. A very good shooter with nice range on his shot, although he is at his best from mid-range and around the paint. An active rebounder that rebounds outside of his area. Excellent shotblocker. Good passer. A big-time national prospect that has serious upside. Has offers from Kansas, Texas, TCU, Iowa, Iowa State, USC, Oklahoma State, Vanderbilt, Wake Forest, Missouri, Arkansas, Creighton and Wichita State.

A very skilled and tough guard prospect that can play both guard positions on the floor. A very athletic and explosive guard that can finish with the best of them when he makes his mind up to do it. A very strong creator off the dribble and has a nice ability to make shots from mid-range or from deeper ranges off the dribble, making him very difficult to defend for opposing guards. Strong off the bounce and to the basket, where he is able to create for himself and others. Plays with very good pace. A strong rebounder. A good defender that could become a lock-down defender over time, if he focuses on it. A good facilitator that focuses much more on scoring, but is capable of running a team nicely. A guard prospect that can compete immediately at the high-major college level. A very underrated guard prospect. Has offers from UCLA, St. John's, Bryant College and Stony Brook.

This was definitely a breakout performance for Diongue, as most college programs have still not seen him, but he had a great showing in the event, and has also had a strong performance thus far this prep season - coming up big consistently for AZ Compass Prep. A very long and athletic post player that is developing rapidly, and wants to be a star. Has great work ethic and an eager attitude to learn. A very active finisher around the basket, and runs the floor very hard for scoring opportunities. Plays with very good intensity. An active rebounder and high-level shotblocker. Has a soft touch from the perimeter. Has a bright future and excellent upside. Has an offer from TCU thus far, but that should change dramatically over time.

A very skilled and athletic guard prospect that can do it all. Had a breakout performance in this event, as he got it done amidst elite competition. A very good ball handler and playmaker with the ball in his hands. A very good passer that sees the floor and advances the basketball. A good shooter with range on his shot. Also has a very good mid-range game and an ability to finish strong at the basket. A very good creator off the dribble. A very athletic guard prospect that finishes well above the rim. Excellent slasher and finisher in the open court. A strong defender that is a capable lock-down defender. Has offers from USC, Washington State, San Diego State, UNLV, New Mexico, Nevada, Loyola Marymount, Cal State Northridge, Texas-San Antonio, Southern Utah and Montana.

A combo-guard prospect that is an excellent shooter of the basketball. Has a pure, left-handed shooting stroke with unlimited range and a quick release. A good ball handler and passer that sees the floor and advances the basketball. Very crafty off the dribble, and can create off the dribble and finish well in traffic or in transition. A strong defender that plays passing lanes. Competitive and accepts challenges. A solid guard prospect. Has offers from Washington State, Pepperdine, Loyola Marymount, GCU, UC-Santa Barbara and Morgan State.

A very skilled wing prospect that can makes shots. Has a good left-handed shooting stroke with excellent range, and can make shots in the half-court set or on the move in transition. Stretches the defense. Has a solid mid-range game and can post up smaller defenders. A good ball handler. Solid passer. A solid on-the-ball defender, and a good team defender. A good rebounder with excellent size. A native of Memphis, Tennessee. Has offers from TCU, Iowa State, Clemson, Texas A&M, Wake Forest, Washington State, St. John's, Ole Miss, Xavier and Mississippi State.

A skilled combo-guard prospect that showed a nice ability to play both guard positions in the event. A good shooter with range and an ability to get in the lane and create for his teammates. Keeps defenses honest with his ability to score and finish off the dribble. Pushes the ball up the floor. A very good defender with quick hands and feet. Active rebounder. A solid overall guard prospect. Has offers from LSU, USC, Missouri, Western Kentucky and Morgan State.