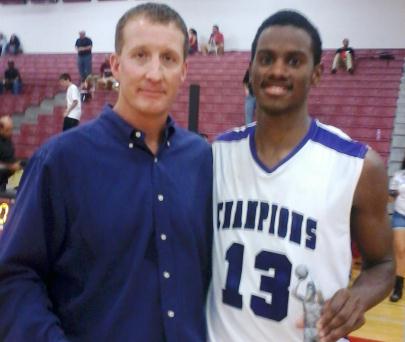 Behind the terrific play of ultra-athletic 6-foot-6 junior post Pablo Rivas, Cesar Chavez would win this year's Division-I, Section-I tournament championship. Rivas, one of the most talented prospects in the state, has really developed his game this season - scoring in the post and also now from the perimeter.
Share
Facebook Twitter LinkedIn WhatsApp Pinterest Email

One of the elite prospects still available in Arizona's super-loaded 2014 class was Cesar Chavez High School's gifted and athletic 6-foot-5 senior forward Pablo Rivas.  While still remaining on the recruiting board for some time and looking to qualify academically, Rivas has decided to end his college recruitment and decide on a nationally rated junior college program.

Rivas consistently showcased his superb talents on the spring and summer AAU/club circuit, while traveling with mentor and club coach Sal Garcia and his club program, Team Zona.  Rivas led Team Zona to numerous strong showings in exposure events in the West.  strong play and development as a college prospect, he generated some serious recruiting interest from numerous schools.  Rivas would reel in offers from Northern Arizona, Denver and Portland State.  He would also receive strong interest from such schools as UC- Riverside and Tulsa.

Rivas is among the top overall prospects in Arizona’s loaded 2014 class.  His length, athleticism and motor are good enough to raise eyebrows of any college coaches watching him perform.  Rivas scores the basketball in a very old-school way.  He uses his great lift on his jump-shot to bank in most of his shots from the mid-range area, uses pump fakes and ball fakes to score under the basket, and draws his defenders out to the 3-point line.  Once he has drawn them into 3-point range, he uses his superior athleticism to rise over them.  Pablo is also an excellent rebounder and shot-blocker for his size.  Once the shot is up, he finds the nearest body and boxes them out and gets the rebound at a very high rate.

Rivas averaged big numbers throughout his high school career, and poured in strong numbers during his senior season, although his junior season was even bigger.  This season Rivas averaged 17.9 points and 11.3 rebounds per/game.  Last season as a junior, Rivas averaged 22 ppg and 13 rpg, while leading his team to an impressive 29-3 overall record on the season.

Rivas is a native of Puerto Rico, and English is his second language.