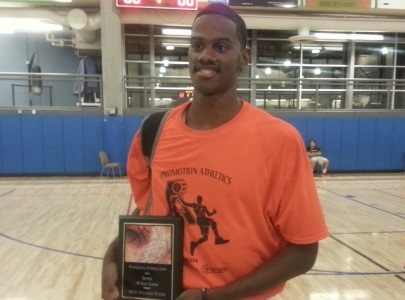 The 1st Annual Promotion Athletics 2014 Senior All-Star Game took place on Saturday evening at the impressive Jewish Community Center in Scottsdale, Arizona.  After the completion to this year's 15th Annual Arizona Preps Falls Showcase and a huge commitment by Zylan Cheatham to the San Diego State Aztecs, the game reconvened at 7:30PM - showcasing some of the state's elite-level talent from the 2014 senior class.

Rivas impressed many scouts in attendance with his ability to play a complete game and showcase many different skillsets.  Rivas attacked the rim and finished very strong, blocked shots, rebounded, scored in transition and shot the basketball nicely from the perimeter.  He flat out did it all and proved why he is among the best sleeper prospects in the West.

"He did it all," said top-rated national basketball scout Jerry Mullens at the event.  "You have to give him the MVP - he did everything in the game."

Rivas is among the top overall prospects in Arizona’s loaded 2014 class, and he is worthy of some serious recruiting attention.  His length, athleticism and motor are good enough to raise eyebrows of any college coaches watching him perform.  The struggle for Rivas has been getting college coaches to his games – making him a serious sleeper prospect for mid-major plus division-I programs.

Look for the college recruitment of Rivas to begin to soar as great deal after this weekend's performance.