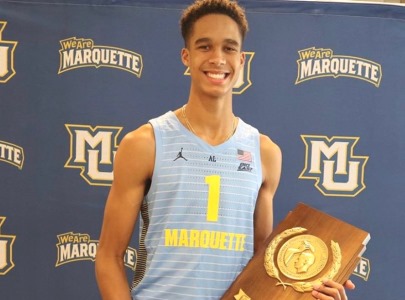 After a nice recruiting process for himself where he saw many schools pursue him hard and jump on the bandwagon throughout his final spring and summer, Desert Vista High School's 6-foot-9, 185-pound senior Osasere Ighodaro made his college decision this week, after narrowing his final list of schools down to (3) programs.

In surprising fashion and with his finals schools down to Marquette, Stanford and Vanderbilt, Osa would elect to announce a big verbal pledge to Marquette University and Head Coach Steve Wojciechowski and his men's basketball staff. The commitment is a big one for the Marqette program, landing the 4-star forward prospect who became one of the hottest prospects in the West this spring and summer.

Marquette assistant coach Stan Johnson has had tremendous success in recruiting the state of Arizona over a long period of time, and at numerous schools. His ability to land and provide an opportunity for successs for Arizona product, star guard Markus Howard, has been epic. His ability now to land Osa Ighodaro over high academic programs, Vanderbilt and Stanford, was impressive. Especially when you consider that Ighodaro is a high academic prospect.

Osa received a rather large number of offers for himself in his final spring and summer. After several strong perfomances on the circuit, he became one of the hottest prospects in the West, and began to see many offers come his way. Ighodaro entered his final spring and summer as one of the better prospects on the rise in the West, and he quickly became one of America's top rising prospects. He had very good success on the club circuit, while traveling with his Powerhouse Hoops club program (now known as Arizona Select), which did a lot for his college recruitment.

Ighodaro became a nice recruiting target as a result of his promise as a college prospect.  He has a long, lengthy frame that looks like it can mature a great deal still, and he also should add some serious size and strength over time.  He has almost unlimited potential as a player and as a prospect, and he already possesses a good overall skill level, which became a very attractive attribute to college coaches.

His final senior season will be a big one for Ighodaro, especiall when you consider that as a junior he averaged a mere 9.8 points, 5.7 rebounds, and 2.2 blocks per/game - numbers that will definitely gain a major boost this season, his final season. Ighodaro left last high school season as a surging prospect, and returned this season as a national prospect.

Congratulations to Ighodaro and his family, as well as the Desert Vista and Arizona Select program on this impressive accomplishment from our Arizona Preps' staff.

Arizona Hoop Review Scouting Report:  Osasere Ighodaro is a unique physical talent, since he has excellent size and length and is still growing a great deal into his young frame.  He has a long, lengthy frame that looks like it can mature a great deal still, and also add serious size and strength over time.  He has almost unlimited potential as a player, and he already possesses a good overall skill level and approach to the game, which is very attractive to college coaches.  He has a good shooting stroke with a pure touch out to three-point distance, and he also possesses a nice mid-range game where uses his soft touch to convert scoring opportunities.  He has good low-post footwork and a nice jump hook.  While he will never be truly physical, added maturity will make him a much better finisher over time.  He runs the very floor well and has good hands, but needs to get much physically stronger to maximize his potential as a playe, especially to compete in the Big East Conference.  An active rebounder as a result of his length.  A very good shotblocker that keeps balls in play.  Has excellent upside.  Potential is almost limitless.