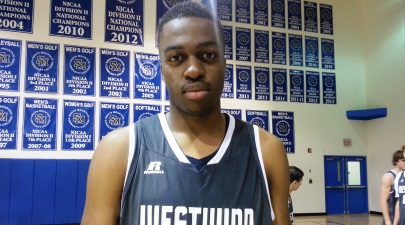 The top unsigned senior and post prospect in the state is now officially off the recruiting board again, and in the same week.  After Westwind Prep 6-foot-11 prep post Kingsley Okoroh gave a verbal commitment on Sunday to the University of Tennessee, Okoroh has changed his mind after the resignation of former head coach Cuonzo Martin this week.

Martin resigned and then immediately accepted the vacant head coaching position at Cal-Berkley, a member of the PAC-12 Conference.  As a result, Okoroh will follow Martin to the PAC-12 program - giving a verbal commitment to the Bears on Tuesday.

Okoroh quickly developed into the state’s premier unsigned post prospect this season, and was also the state’s top unsigned overall prospect in Arizona’s 2014 class for the spring.  While recently just turning 18 years of age, Okoroh is a large post talent that spent last season at the nation’s premier basketball program - Findlay Prep (NV).  A native of England, Okoroh is among the biggest post prospects in the country and, while he is still a raw talent, he was hearing from a large number of division-I programs.

A very good looking post prospect as a result of his sheer size and tremendous upside for the future, Okoroh will need to get a better overall motor to reach his full potential as a player.  Okoroh does has good low post skills and solid footwork, but the game can become too fast for him at times.  His sheer size and strength are glaring attributes though, and he has the potential to become a force in the post with continued hard work and dedication to his craft.  He is a good rebounder and shotblocker, as a result of his size, but he needs to work to rebound outside of his area and finish plays amidst bigger defenders.

Arizona Hoop Review Scouting Report:  Okoroh is still a project overall, but he does have a good overall skill-set and a good understanding of the game.  While the game still seems to be fast for him at times, when he gets the basketball in the post he is capable of finishing strong at the rim.  Over time, as he gains more maturity physically and more explosion off the ground, he should do a much better job of finishing around the basket.  He does possess a good jump hook and gains very good low-post position inside the paint, as there are not many post players that can match his physical size.  Okoroh can run the floor now but should run much better over time with added maturity and physical strength.  He is a good rebounder as a result of his size, but needs to continue to work harder to rebound outside of his area.  He is a good shotblocker with excellent length of body and has solid timing, but his lack of quickness, often times, causes him to be out of position for the play.  Over time and with hard work he should become a much more productive shotblocker.  A nice looking post prospect overall that has international experience and a bright future ahead of him.