Offers Pouring In For Tru Washington 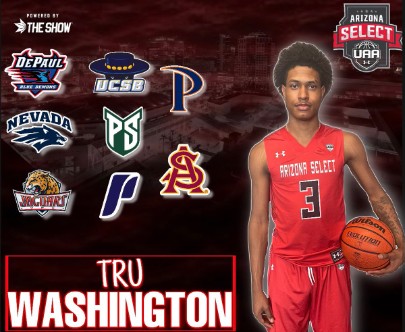 Offers are now pouring in for Mountain Pointe High School's 6-foot-4 sophomore guard Tru Washington. While Washington began receiving loads of Division-I offers early in the recruiting process, his college recruitment has recently taken off a great deal, as numerous offers have recently poured in for him.

Washington burst onto the Arizona high school varsity scene as a freshman, and was the second leading scorer for a very talented team that finished with a strong 22-7 season. Tru would average 13.6 points, 5.1 rebounds, 1.9 assists and 2 steals per/game, as a mere freshman starter in the state's top 6A Division. As a sophomore, Washington changed locations, and attended Mountain Pointe High School, where he teamed up with a loaded group of guards, that included two of the state's elite guard prospects in senior guard Jason Kimbrough and fellow 2023 sophomore guard Mark Brown. Washington picked up his numbers this season - leading Mountain Pointe to a 15-6 overall record on the season, while posting 21.6 points, 8.2 rebounds and 3.2 steals per/contest.

Washington is absolutely blowing up lately, as many Division-I college programs have extended offers to him, looking to position themselves with Washington in his college recruitment. Recently, Washington has received offers from UNLV, TCU, LSU, Georgia, Portland, DePaul and Pepperdine, to go with offers already from Arizona State, Nevada, UC-Santa Barbara, IUPUI and Portland State.

Washington is an intriguing prospect at 6-4, as he is able to play as a combo-guard, but is at his best while scoring the basketball from the off-guard position. He has a nice shooting stroke with range on his shot, which makes him difficult to defend for opposing guards. He is at his best when putting the ball on the deck and making plays off the dribble, where he is a strong finisher at the rim, as a result of his left-handed prowess, which makes him even more difficult to defend. He has excellent body control and is a strong finisher around the basket and in the lane, or in the open floor where he thrives. He also possesses a good mid-range game, which allows him to operate between the lines at a high level.

Washington is also a strong rebounder from the guard position as well, and is able to post up smaller guards around the basket and be very effective at making plays or drawing fouls from the opposition. A left-hander, Washington is a very good ball handler and does not play around much with the basketball. Instead, he makes plays efficiently and with purpose. He is a good passer as well, and sees the floor, while also pushing the ball up the court to the open player or teammate, and then filling the break. He likes to play fast and with good intensity and aggression.

Arizona's 2023 Class is quickly developing into a nice class of prospects, and Washington has rapidly emerged as an elite prospect in the class. It will be very interesting watching him continue to grow and develop over the next several seasons, as he is off to a very fast start already. He is very mature already physically, so he will only get physically stronger and more explosive over time.

I will continue to follow the recruitment and progress of Tru Washington closely over the next year, and bring you recruiting updates as they continue to develop.