Offers Pouring In For Jalen Graham 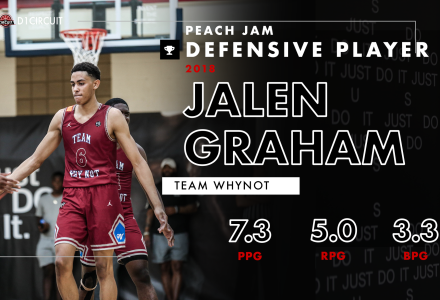 No prospect in Arizona's talented 2019 class of rising senior prospects has seen his college recruitment begin to soar more this summer than Mountain Pointe High School's 6-foot-9 senior post Jalen Graham.  Graham went into the summer with no offers, and now he has quickly become a hot commodity for many college programs in the West.

Graham recently received his first offer from Grand Canyon University, and now many more schools are looking to be in hot pursuit of the talented rising senior post prospect.  Graham is a top-rated prospect that many had yet to see playt, until recently when Graham helped lead his club program, Team Why Not, to a runner-up finish at this year's Nike Peach Jame on national television - catching the attention of many college coaches in attendance and watching on television.

Graham also received honors as the Nike Peach Jam Defensive Player of the Tournament - an amazing honor for Graham.  As a result, Graham has become one of the hottest sleeper prospects in America.  Recently, Graham has received offers from numerous schools as Oklahoma, Texas Tech, Nevada, Kansas State, Fresno State, Boise State and Weber State have each also offered the very gifted prospect - a long list of suitors for Graham.

As a result, Graham saw loads of college coaches at his games last week in Vegas, while playing with Team Why Not in the Big Foot Hoops basketball tournament.  His team was featured in every game and played in front of loads of college coaches.  The crowd featured many top-rated college head coaches including Mike Krzyzewski (Duke), Jay Wright (Villanova), Bob Hurley (Arizona State), Dana Altman (Oregon), Buzz Williams (Virginia Tech), Dan Majerle (Grand Canyon), and many others.  Graham was a hot target on a loaded team that featured top-rated national prospect Cassius Stanley.

Graham does still have a lot of work to do in the classroom before he is cleared to be academically eligible.  It has been widely reported that Graham has had his struggles in the classroom, but he seems to be working much harder these days to improve his academic performance.  Graham is on pace to improve his Core GPA to a 2.3 grade point average by the fall, according to his former high school head coach Duane Eason, who recently left the program to take a head coaching position at Phoenix College - an amazing honor for Eason.

Now Graham will play for a new head coach in his final season of high school - an important year for Graham, who will need to have a great final season, on and off the court.  Either way, Graham is a true gem - a prospect with loads of upside and potential for the future.  He has blossomed into a high-major division-I recruit over the past several months, and has seen his stock rise more than any other prospect in the state of Arizona.  As much as we have ever seen.

Graham is a lengthy and athletic post prospect that will only continue to improve a great deal over time, and, as he develops a strength and conditioning regiment, we will see this young man blossom.

I will continue to follow Graham's college recruitment closely, and bring you any updates as they continue to develop.