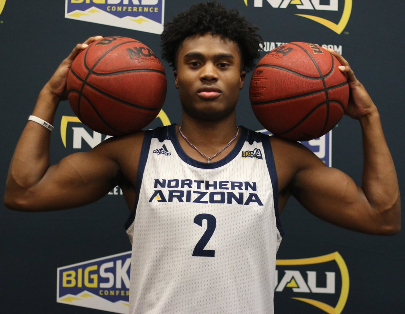 Another prospect that used the summer's NCAA Evaluation Period to take his college recruitment to another level is Sunnyslope High School's dynamic 6-foot, 185-pound senior point guard Oakland Fort. While heading into the spring's evaluation period with one mere offer to his credit, Fort became one of the hotter point guard prospects in the West's 2022 Class. While he still has only (5) offers to his credit, many college programs observed Fort and discussed with me the possibility of having him lead their college programs. While I believed that Fort would have and is well deserving of many more offers for himself, he has decided to begin official recruiting visits for himself and will look to make his college decision very soon.

Fort currently has offers on the table also from Radford, UC-Davis, Southern Utah and Portland State. He is in the process of scheduling official recruiting visits to each program.

Like his terrific high school and club teammate Elijah Saunders, Fort was very well under recruited for some time, due to the COVID pandemic. He held an offer from NAU, his first offer, for some time, before receiving more offers for himself during the NCAA Evaluation Period. Like Saunders, Fort used the NCAA's summer evaluation period to attract much more recruiting attention for himself, after a strong junior season where he he helped lead Sunnyslope to a 6A State Championship.

It is still unclear as to whether or not Fort has a leader in his college recruitment, but he will look to make his decision this fall and sign with a college program of his choice.

It was thought that Fort would have many more offers after his big performance on ESPN last season - a big win by Sunnyslope over Mater Dei High School (CA), 52-42. In the win, Fort went off for a game-high 23 points on national television.

Fort is as quick and explosive a guard prospect as there is in the West, regardless of class. He has significant bounce and lift off the floor, and plays at a high speed on both ends of the floor - glaring attributes for him as a college prospect. He is a pass-first point guard prospect, that enjoys getting his teammates the basketball and creating scoring opportunities for his teammates. He is also a proven scorer as well, as evidenced by his outburst against Mater Dei, but it is not his focus. He is a good shooter with excellent range on his shot, but he needs to continue to look for his shot much more to maximize his scoring ability. He is an ultra-quick ball handler and passer, that pushes the ball up the court as much as possible. He enjoys playing in an up-and-down, fast tempo-paced game, where he is very difficult to defend and slow down. Fort is also an excellent on-the-ball defender, capable of becoming a lock-down defender at the collegiate level. He also plays passing lanes effectively, and applies excellent pressure on opposing guards.

Fort is also an excellent student and is looking for the best fit of academics and athletics for himself. He is a future leader on and off the basketball court and has a bright future ahead of himself in life.

I will continue to follow his college recruitment and bring you any updates as they continue to develop.