Dell Mims Taking Over The Reins 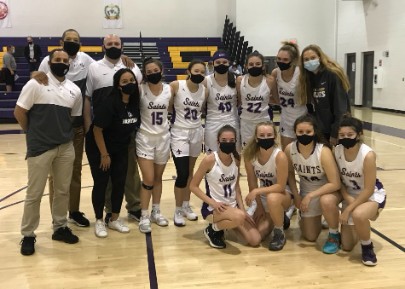 Scottsdale's Notre Dame Prep Ladies Basketball has a new coach this year. Dell Mims has taken the job and has serious intentions to develop a squad that makes noise, competes, aims for the ship and teaches these young athletes the game of life - on and off the court.

Coach Mims has been excited for the process, so much in fact that he had tons of specifics about each individual player to share.  Coach went on to share the following “This year we have great senior leadership that set the tone for the underclassmen in the program," said Mims. "We have a team that everyone is willing to sacrifice their own individual achievement. Glory for the betterment of the team, and they have all starred in their roles. They have all bought into what our coaching staff wanted to do, and worked their tails off in the summer, Pre-season and this basketball season. The belief that our team has in each other is as real as it gets. I always tell them - Do your part and God will meet you half-way.  This couldn’t be truer for us this season."

Senior Alivia Pautz is the go-to-player.  She’ll be attending Black Hills State University (D-II college program) to continue her studies, and play college basketball.  She is a threat on both ends of the floor - averaging 17 points and 11 rebounds per/game.  She has averaged double-figures in points and boards almost every game this year. She is consistent and someone the team can count on to produce on both ends of the floor, every game.  She has also stepped up to the plate on her leadership off the court.  She has done a great job being a senior leader this year, vocally and leading by example.  Coach has asked a lot of her this season and she has stepped up big time for the team.

Mia Tokish 5-foot-7 senior PF has been a great vocal leader. She brings so much toughness to the squad. You don’t always see what she does in the stat book, but everyone that is part of the program knows.  That type of unsung player is invaluable to a team.

Paula Doherty 5-foot-7 senior PG is one of the main ball handlers. She doesn’t wow you, as far as scoring the ball, but she does a pretty solid job of keeping the assists piling, more than the turnovers.  She also is a solid guard rebounder and leads her team in assists. Paula impacts the game with her high basketball IQ.

Shannon Nagel 5-foot-7 senior guard seems to be the team spark plug. Whenever she is in the game she gives the team a huge boost.  Shannon seems to step up big in key moments, whether it’s getting a big defensive stop, steal, 3-point shot, etc.  Shannon is a very valuable piece to our team.

Lilly Gutierrez SR tore her ACL right before Christmas break and is out for the season. Although she physically can’t help on the court, she has helped just as much with her leadership, and being like another coach over on the bench.  She always makes sure during the games that the bench is hyped and energetic.  She is a bright light for the team.

Ava Pautz, younger sister to Alivia, is a freshman, but is very advanced basketball wise.  She hasn’t even scratched the surface on how good she can be.  Her ceiling is very high. Coach Mims said "There is no doubt in my mind, if she stays humble and continues to work on her game, she will be playing at the next level."

Charlotte Kelmon Jr. suffered a foot injury during the pre-season, but is 100% now. She is the team's best 3-point shooter, and is one of the best shooters in the conference.  Being a 6-foot guard, she creates a lot of match-up problems for opposing teams.

Payton Riggins Soph 5-5 guard - She has been a very big key for team success.  She is a solid defensive player and her offensive game has improved so much from this past summer.  Payton is oozing with potential and will be a player to watch for in the future.

The rest of the players on the team that don’t see much time, but I’m told will be key players next year are:

As varsity boys’ head coach at Paradise Honors High School in the 2014-2015 season, Coach Mims improved the Panther’s record to 9-9 from the team’s previous season record of 4-21. Mims also spent (6) seasons at Paradise Valley High School as a varsity boys’ assistant coach, where he helped lead the Trojans to a State Semi-Final appearance in 2016, and a State Title in 2013. Coach Mims served as the Freshman Head Coach in 2010.

Dell began his coaching career in his hometown of Cedar Rapids, IA, where he coached at his alma mater Jefferson High School for two seasons as boys’ varsity assistant coach, and head boys’ junior varsity coach from 2006-2008. In 2008, Dell was also inducted into the Jefferson High School’s Basketball Hall of Fame as a former player. Mims was a four-year starter in high school and earned All-State honors his junior and senior years. Dell is among the career leaders at Jefferson in several categories.

Coach Mims earned his Bachelor’s Degree from Northern State University in 2006 in Physical Education and a minor in coaching. Dell played for the legendary coach and ESPY award winner, Don Meyer, while attending Northern from 2002-2004. Prior to that Dell played for Coach Joe O’Brien 2000-2002 at Southeastern Community College. SCC at that time held the record for the all-time winningest Division I junior college in the country and the Blackhawks won the 2000, 2003, and 2004 national titles. In 2002, Dell was selected to the conference All-Academic team.

After his college playing days, Dell had the opportunity to play professionally before getting married in 2006. Coach Mims will undoubtedly be an impactful coach for Notre Dame Prep for the future.