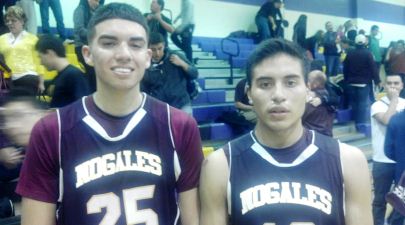 The last time these two teams met it resulted in a one-point win for Mesa High School.  The game took place last season on Nogales High School's home floor and a loaded Mesa team was much younger.  Now, a year later, the Mesa Jackrabbits are much more developed as a team and sport possibly the state's most talent-filled team of players.

Nogales (21-5), led by the superb play of 6-foot-1 do-it-all senior guard Andres Marquez, came into Thursday night's contest amongst the leading scorers in the state - having scored 40+ points in several different games this season.

Mesa would show just how good they can be in the first half of this game, as they would jump out to a big lead against Nogales quickly.  Mesa would start the game with a 12 to 3 lead in the first period, until a driving layup from Marquez with 1:15 left to play in the period would stop the bleeding for Nogales.

After a three-pointer from 6-foot-2 senior guard Dan Richards, Mesa would take a 15-5 lead after one quarter.

In the second period, Mesa would outscore Nogales 21 to 6 and take a big lead in the game.

Mesa's 6-foot-4 sophomore guard Jalen Jenkins would get things started off with a driving layup, a three-point play from 6-foot-11 junior post Isaac Allen, a three-pointer from 6-foot senior guard Christian Harris, a one-handed dunk from Allen, a mid-range jumper in transition from 6-foot-1 senior guard DJ Henderson, a jump hook from Allen and a driving layup from Henderson and Mesa would jump out to a big 36-11 lead - a 25-point margin over Nogales going into the half.

At halftime, Nogales head coach Ricardo De La Riva must have said something really good to his team, because the Apaches would come out on fire in the second half.

Andres Marquez would catch fire in the second half and would start off the third period with 6-straight points for Nogales.  After a driving layup by Marques over Isaac Allen, Nogales would get within 20 points, 41-21, with 4:57 left in the period.  Then 6-foot-6 senior forward Bryan Cervantes would rebound a missed shot attempt by Marquez - making a mid-range jump shot and making the score 41-23, Mesa.

But Mesa would get two consecutive three-pointers by Christian Harris and DJ Henderson - putting Mesa back up to a 47-23 lead.

Marquez would keep fighting for Nogales, and he would hit a three-pointer to stop Mesa's momentum.  After a turn-around jump shot in the post by Cervantes, and then a steal by Marquez, which he would travel down the floor and finish a strong layup after being fouled.  Marquez would make it a three-point play after a free-throw and Mesa would end the quarter with a much smaller 50-33 lead in the game.

In the fourth period, Nogales would keep their momentum going, as Marquez would get another steal and travel the length of the floor and dunk the basketball.  A few plays later, Marquez would knock down a three-pointer and pull Nogales to within 14 points, 53-39.

Mesa's Christian Harris would knock down his second three-pointer in a row to put Mesa ahead 56-39.

But Nogales would keep fighting as Marquez would find 5-foot-9 junior guard Anibal Montoya in the corner for a three-pointer.  After two consecutive three-pointers from Cervantes, Nogales would climb back to within 9 points, 59-48, with 3:20 left to play in the game.

While Marquez would hit another three-pointer and Cervantes would score on two more baskets for Nogales, Mesa would weather the storm and hold on to win the game, 69-58.

Mesa would be led by DJ Henderson with a team-high 19 points and Isaac Allen with 14 points.

Nogales would be led in the game by the gritty duo of Marquez and Cervantes, as Marquez would finish with a game-high 25 points and Cervantes with 19 points in the loss.

Mesa will now face Marcos De Niza HS on Friday evening in their final regular season game, while Nogales will advance to the post-season.  While Mesa is definitely among the favorites to win this year's Division-I state championship, look out for this Nogales team amongst the state's elite teams in the Division-II Class.