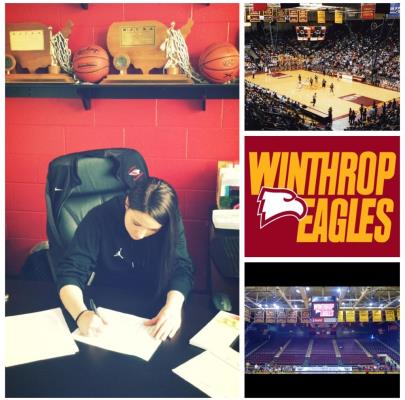 Today is a big day for former Horizon High School 2015 graduate Noell Kellers.  The Trinity Valley Junior College (TX) 5-foot-9 freshman guard prospect has given a verbal commitment to play for Winthrop University in South Carolina, and will sign a national letter of intent this morning with the program.  After overcoming significant odds for herself over the last two years, Kellers has achieved her dream of playing division-I basketball after almost everyone turned their back on her.

After very high expactations for herself as a senior at Horizon High School, Kellers was ruled ineligible by the AIA, due to transfer rules, after she decided to transfer schools from Desert Mountain HS during the summer before her senior season.  As a result, while everyone was playing during the 2014-2015 high school basketball season, Kellers would have to sit and watch in tremendous disappointment as her friends all played.

Kellers would appeal the process through the AIA, only to lose the appeal process, as the AIA ruled that her transfer was for athletic reasons - causing Kellers to miss her senior season.  As a result, Kellers would work very hard in the weight room and train individually, allowing her to fully recover from an ankle injury that caused her to miss much of the 2014 summer evaluation period.

Kellers would then venture to Trinity Valley Community College in Texas, where she spent this season as a freshman contributor for a loaded ballclub that would compete at the highest level nationally.

"It was a big adjustment for me," said Kellers.  "The girls here were much bigger, stronger and faster.  I had to get in shape to play here.  I worked so hard."

Kellers contacted the nationally ranked junior college program on her own, and recruited the program for her future endeavors.

"I didn't just sit back and wait for schools to recruit me.  I had to get it done.  Everyone turned their back on me when I didn't play my senior year.  I knew playing here with some of the best girls in the country would help me prepare for division-I."

Kellers would play her freshman season at Trinity Valley this season and would play sparingly on a loaded ballclub, but she would impress numerous college coaches with her play.

After receiving serious interest from DePaul, Florida and numerous other programs, Kellers decided to pull the trigger with Winthrop University on Wednesday - electing to forgoe her sophomore junior college season, and play three years at the division-I level.

"It is amazing to be done with recruiting and to be headed to such a great school.  It just felt right for me.  I could have come back next year and received higher recruiting, but I found the right school for me."

Kellers plans to attend Law School in the future, after completing her undergraduate studies, and has hopes of becoming an attorney.  I have no doubt that she will reach her goals after basketball, because she is definitely reaching them in basketball.

Before missing her senior season, Kellers was selected as her school’s Most Valuable Player for the season.  While her team struggled to win ball games at Desert Mountain HS in her junior season, Kellers averaged 11.8 points and 2.4 assists per/game.  As a sophomore, Kellers also soared for Desert Mountain HS – averaging a team-high 16.6 points, 3.2 rebounds and 2.3 assists per/game on the season.