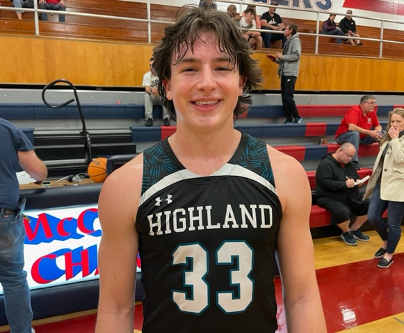 The annual McClintock Holiday Shootout is always exciting with top performers and top performances, and this year's event has not disappointed, as day two of this year's event Tuesday evening saw an impressive performance from Highland High School's 6-foot-3, 215-pound senior guard Noah Peterson, as he led Highland (12-1) to a big 80-70 quarterfinal victory over Liberty High School. In the win, Peterson did it all, as he poured in a game-high 31 points, 7 rebounds and 6 assists - leading Highland to the tournament's semi-finals.

The victory was not a true upset, as Highland has posted an excellent season thus far, going 12-1, and also defeated a talented Valley Vista High School in the first round of the tournament, 69-60, behind another 26-point, 7 rebounds and 6 assists effort from Noah Peterson.

In both victories in the McClintock event, Peterson has proven that he is a force to be wreckoned with and is a very underrated prospect among the 2023 Class of top performers. Peterson's stock is definitely on the rise, as he is a nice talent for the guard position - able to play both guard positions on the floor and possessing a college-ready body. He handles the ball from the point position as needed and is a true play-maker, as he surveys the floor for his team and creates scoring opportunities for himself and his teammates. His strong, physical frame allows him to overpower his opposition and he has an excellent shooting stroke with unlimited range, which makes him an asset on the floor and also difficult to defend for opposing guards. He is a strong ball handler and passer and also a strong rebounder from the guard position.

Peterson is a nice talent among the senior class and is well deserving of recruiting attention and a ranking among our Top 25 prospects in the class. He will definitely see a rise in our next player rankings, based on what our staff has seen throughout his high school career and definitely thus far this high school season. I feel like we missed on this one in our last player rankings, but Peterson's work ethic, ability to play and the intensity he plays with are more than deserving of as much attention as we can bring to him. On one play on Tuesday evening, after a strong offensive rebound, Peterson fell to the floor and landed square on his head. He immediately got up, when most players would have not, and continued to lead his team to a big win. This young man is my kind of player and worthy of serious respect. I am giving it to him.

The McClintock Holiday Shootout will wrap up on Thursday evening with the Championship game.