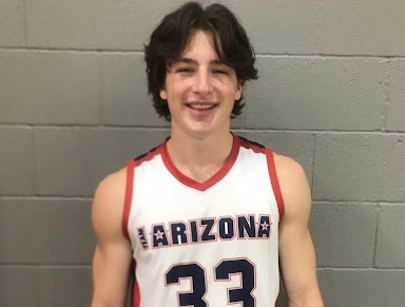 Gilbert's Highland High School 6-foot-3 junior guard Noah Peterson has been showing a ton of improvement in his potential for the game of basketball. Noah has become one of the top underrated well-built shooting guards in the 2023 Class.

Noah is an aggressive and rough slasher to the basket. He has also ’s been taking his shooting ability to another level. He’s also a very smart player. Noah has been in the gym working on his game day in and day out. He’s been lifting a lot every week, as he has been in the weight room more than he eats.

Noah played multiple sports when he was younger. He played football, soccer and volleyball. He eventually realized in the 8th grade that basketball was his sport.

Last season as a junior at Highland HS, Noah had to go through a tough time and missed much of his entire junior season from dealing with Valley Fever. Noah was out from November 4th - February 8th. In the process, Noah lost 25 pounds, but gained it back in (2) weeks after being cleared. In Noah's first game back from illness on March 23rd, he put up a great performance in his first AAU/club game of the season. Noah ended up with 18 points, 9 rebounds and 3 steals against Factory. Noah is an amazing and resilient player with his pride for the game.

Noah’s goals this spring and summer are to win games and earn interest from college coaches in his recruitment. Noah also would love to help his Team Arizona teammates be successful. Noah’s goal for high school is to win a state title for Highland High School. Noah is looking to put up strong numbers consistently and be a great leader for Head Coach Todd Fazio.

Noah is gonna make a lot of noise in his last club season and senior season for high school. Noah loves the competition and puts in the serious hard work. I am looking for what the future holds for this young man.