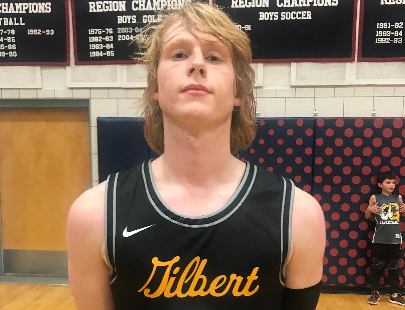 Gilbert High School (26-4) had a terrific season and was rated among the elite teams in the state all season long. Much of the reason for the team's success this season was a result of the stellar play from 6-foot-1 senior guard Nikko Pentelute. One of the elite performers all season long, Pentelute turned in numerous strong performances while leading the Tigers to a fantastic high school season in 2022. While he had a great high school season, Pentelute's college recruitment was much slower than expected, as most college programs are only recruiting the transfer portal. As a result, Pentelute has decided to take his game to the junior college ranks for next fall.

Pentelute announced this week that he has decided to play for Pima Junior College and Head Coach Brian Peabody and his staff - one of the top Division-II junior college programs in the country. Penetelute is a full academic qualifier per NCAA academic standards, so he would only need to go to a juco for one year, although the junior college ranks will only improve with talent next season and beyond, as lesser four-year college programs recruit high school prospects.

Pentelute is one of the state's elite guard prospects, and he proved it throughout his high school career at Gilbert HS, and while playing for his club program Arizona Prime. Pentelute had a terrific high school career, and helped to continue to make Gilbert High School respected among the elite high school programs in the state. While I thought Pentelute would be highly recruited by smaller college programs, he is still definitely well deserving, as he is one of my favorite overall guard prospects in the state. Unfortunately for Pentelute, college programs really failed to catch a glimpse of his talent or appreciate him as a player, as was the case for most of the state's top 2022 prospects. Like Pentelute, many of these top-rated prospects will also need to go to the junior college ranks to improve their college recruitment, since most college programs will be recruiting the NCAA's Transfer Portal now and in the future.

Nikko put up strong and consistent numbers this season for Head Coach Jay Caserio and his terrific coaching staff. Gilbert was one of the best coached teams in the state all season long, and Nikko was the catalyst for what the staff was consistently trying to accomplish. Gilbert had numerous major wins on the season, and came up just short of winning a state championship - falling to Centennial High School (46-39) for the 5A State Championship.

Regardless of winning it all or not, Pentelute is one of my favorite guard prospects, as he is a fundamentally sound performer with a nice shooting stroke of the basketball with a quick release on his shot and excellent range. He is a floor general point guard with the basketball in his hands, and loves to find the open man on the floor. He is also capable of playing both guard positions on the floor, as a result of his scoring prowess. He is a strong ball handler and gets low to the ground on his dribble. He is also a natural leader on and off the basketball court, and will be very successful in life - regardless of what he decides to do. A great teammate that absolutely loves the game and plays with a purpose.

The junior college ranks should benefit Pentelute well in his college recruitment over time, as he is a coach on the floor and will work hard on his game to be the best player he can become. Congratulations to him on finding a college home in a very interesting year where scholarships will be very hard to come by for high school prospects.