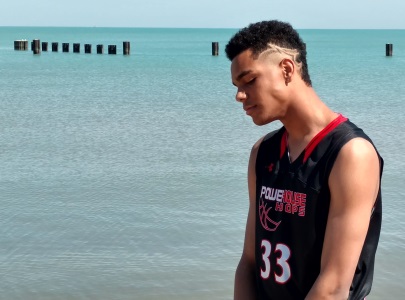 Rancho Solano Prep's 6-foot-8, 195-pound senior forward Nikc Jackson is one of the top overall prospects in Arizona's 2018 class, but was a very underrated prospect in the class.  While I believed that Jackson should have received much more recruiting attention for himself, rather than wait for the late signing period, Jackson decided to pull the trigger early - giving a verbal commitment to a program in the Mountain West Conference.

This weekend, after taking an official recruiting visit to the program, Jackson decided on Air Force - giving head coach Dave Pilipovich and his staff a verbal commitment.

Jackson will sign with Air Force this November, during the early signing period.

A native of Michigan, moving to the state of Arizona last summer (2016), Jackson emerged immediately as a division-I prospect.  He did not disappoint last high school season either - averaging impressive numbers on the high school season.  While leading his Sunnyside HS program to an 18-11 overall record on the season, Jackson averaged 18.1 points, 10.6 rebounds and 2.4 blocks per/game as a junior.

Jackson also had a good spring and summer performance on the club circuit, while traveling with his Powerhouse Hoops program.  Jackson was among the top prospects for the Powerhouse program and helped lead his team to a tournament title in this year's Baylor All-Star Classic in Chicago, Illinois - defeating the historic Mac Irvin Fire in the event's championship game.

Congratulations to Jackson, his family, Rancho Solano Prep and the Powerhouse Hoops club program on this impressive accomplishment.

Arizona Hoop Review Scouting Report:  Jackson is a nice stretch-4 prospect that could translate to the 3 position at the collegiate level over time.  He is a very skilled and long athletic forward prospect with excellent versatility and a tremendous knack for the basketball.   He is an excellent offensive rebounder that uses his length and good timing to keep balls alive and finish plays inside the paint.  His length also allows him to be an excellent shotblocker that has the ability to block and keep balls alive, while also changing shots effectively.  Jackson is a very good low-post scorer with excellent footwork, and his left-handed shooting ability makes him difficult to defend around the basket, as he is able to score from different angles off the glass.  He is also an effective shooter of the basketball from mid-range and can also step outside to three-point distance and make shots, from the stand-still position or off the dribble, although he is at his best from mid-range.  Jackson also runs the floor very well and is an excellent finisher in the open floor.  He plays well above the rim and finishes strong over defenders with dunks, and is able to get to the free-throw line quite often.  This young man has excellent potential for the future and is among the best sleeper prospects in Arizona's 2018 class.