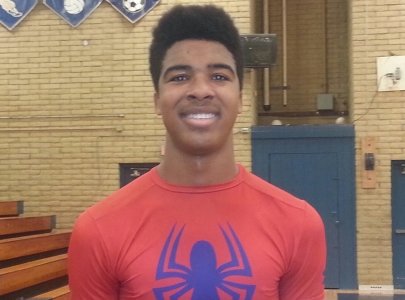 For his efforts, Shadd recently received his first of many scholarship offers that he should receive in the future.  Grand Canyon University was impressed enough by the talented prospect to offer him a scholarship very early in the recruiting process.

Shadd should get many more scholarship offers in the future, as he is a sure-fire recruiting target in the class - a long and athletic power forward that plays big and does not venture far away from the basket.  He is still merely 15 years of age also, which suggests that he is still growing a great deal.  He has a lot of room to grow still and could get to 6-10 or 6-11 when it is all said and done. - a scary thought.

Shadd is still in the process of putting together a great spring, after leading his club program, the Arizona Magic Elite 16U, to two consecutive tournament championships in both highly competitive Pangos spring events.  Shadd has been the team's best player also in both tournaments, which will be big in his future college recruitment.

This past season as a sophomore, Shadd was tremendous - averaging 15.1 points, 11.6 rebounds and 4.2 blocks per/game.  Playing alongside star 6-foot-7 junior forward Brock Gardner (25.8 ppg, 9.2 rpg), Shadd will return next season to give Tri-City one of the best lineups in the state.

Arizona Hoop Review Scouting Report:  Shadd is a long and lengthy power forward prospect with loads of potential for the future.  Still very young for his grade, this young man is one player that has a chance to become a very special player with serious hard work.  Already 6-8 in heigth, Shadd should grow to be 6-10 or 6-11 when it is all said and done.  He is an effective fnisher around the basket and plays well above the rim already.  He currently has a nice jump hook with either hand and has solid footwork.  He still needs work on his low post moves to be more effective against top-notch post players.  He also can develop his footwork.  A solid shooter from mid-range, Shadd will need to develop in his ability to shoot from longer ranges, but he is at his best around the paint.  A very good and active rebounder.  A very good shotblocker with good timing.  An excellent prospect for the future.