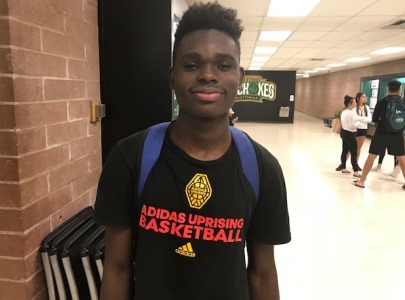 Numerous players have made a nice jump in our recent player rankings for their respective classes over the spring and summer, and one prospect that has made one of the biggest jumps in recent Arizona Hoop Review Scouting Report that goes out to college coaches is Bella Vista Prep's talented and athletic 6-foot-3, 185-pound senior guard Nicolas Elame.  Elame is among the best overall players in Arizona's 2019 Class, and while he has (5) offers for himself currently, he is one prospect definitely on the rise.

While Elame is receiving some attention from college coaches currently, he is actually better than his college recruitment suggests.  While he does currently have some very quality schools that have offered him at this point, this young man has international experience and plays both ends of the floor exceptionally well.  He is flat-out one of the best pure basketball players in the state, and is an immediate impact player as a result of his consistency on the floor and sheer competitive spirit.

A native of France, Elame currently has offers from UC-Santa Barbara, Fresno State, UTEP, Southern Utah and North Dakota.  He has not currently indicated a leader in his college recruitment, so it will be interesting to see where he lands, and also whether he will go with one of the current schools that have offered him, or wait late and reel in many more offers for himself.

If Elam does wait late, his ability to play the game on both ends of the floor will attract many college programs this season.  Also while playing for one of the top prep programs currently in the country, Elam should gain even more recruiting attention as the season progresses.  If he decides to pull the trigger this fall, which he definitely could do, several of the schools currently recruiting him look to be very good spots for him, as he could come in and play right away at a nice level.

Elam is a valuable asset to any team and he proved just how valuable he was last season, when he emerged a great deal in his team's narrow 59-58 loss to Prolific Prep (CA) in the Grind Session.  In the defeat, Elam proved that he was a very serious prospect as he was the best player on the floor for Bella Vista in the game.

Elam is a combo-guard prospect that is very capable of playing both guard positions on the floor at a high level - capable of running a team efficiently and also scoring the basketball at a high rate from the off-guard position.  Elam is a very good shooter of the basketball with excellent range on his shot, and also a strong ability to get the rim and finish strong.  He has excellent speed and quickness, combined with superb athleticism and has a quick first step that allows him to blow past defenders.  He is a very good ball handler and passer that sees the floor, and is a good penetrator and finisher in the lane - a fundamentally sound performer.

Elam's best asset though is his ability to defend opposing guards.  He is a capable lock-down defender with quick hands and feet, and plays passing lanes while being able to stay in front of his man at all times.  A valuable asset as a one-on-one defender.

Elam showed off just how nice his ability is as he went off on Wednesday evening in his team's exciting match-up with Scottsdale Community College.  In the game Elan scored the basketball at a high rate and finished the dunk of the evening just before the half, while traveling the length of the floor and finishing high above the rim in traffic.

Elam is a tremendous talent and will look to have a very big year this season for Bella Vista head coach Kyle Weaver.  Whichever school lands this young man will be getting a superb talent for the future that should make an immediate impact.

Arizona Hoop Review Scouting Report:  The athletic combo-guard has an excellent overall feel for the game and very good versatility as a player.  He is a strong driver of the basketball and a very good finisher inside the lane over bigger defenders.  He is also an excellent and consistent shooter of the basketball with range, and has a nice mid-range game for himself, which allows him to stop on a dime and make shots.  He is a very good ball handler and passer that sees the floor, and is an effective combo guard that plays either position very well.  He is an excellent lock-down defender that has quick hands and feet and plays passing lanes.  Elam has the potential to play at the high-major division-I level, but he will be very good and an immediate impact at a strong mid-major or mid-major plus program.