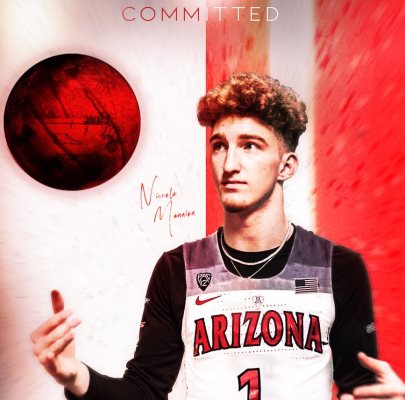 After what seemed like a long college recruitment, although it was actually a year sooner than it would have been, the exciting college recruitment of Pinnacle High School's superstar 6-foot-3 senior guard Nico Mannion has come to an end, after the gifted guard prospect selected the University of Arizona and head coach Sean Miller and his staff on Friday.  While it was an exciting recruitment for Mannion, he decided to pull the trigger very early in the recruiting process - giving his verbal pledge a year earlier than expected and in the early fall recruiting period.

Recently, Mannion had narrowed down his list of schools to two college programs, before also narrowing down to four schools earlier - Arizona, Marquette, Duke and Villanova. Arizona would eventually win out in the hunt for the gifted guard prospect - a major and tremendous commitment for Sean Miller and his staff, after a very challenging year last season, on and off the court.  The commitment by Mannion now brings new recruiting life to the Wildcats' basketball program, which lost out on several of their former commits last fall and spring, after the FBI Investigation surfaced.  Mannion will look to bring excitement to the program's future, and he could be coming with friends as well.  Club teammate and former Arizona state prospect Josh Green also has Arizona in his final (5) schools, and he could be joining Mannion in the Wildcats program.  Honestly, I would be very surprised if he did not.

This club season, which included the spring and summer, was a big one for Mannion, as he traveled the country and even the world, and faced high-level competition at each stop.  At each stop though, Mannion was his usual self and his competition did everything they could to slow him down, but failed.  Mannion has become a basketball legend of sorts around the country, as the nation's basketball community of scouts, media and fans have gathered to watch the redhead kid get busy, and he never disappointed.  After dominating his competition on the Under Armour basketball circuit last spring, Mannion then took his game to his native country Italy, and played at his usual high level against world competition.  He then returned back to the state's this summer to get back to business on the club circuit with his loaded West Coast Elite program, organized by Ryan Silver.  Recently, Mannion finished off his summer while dominating fellow national prospects at the Steph Curry Basketball Camp, as he won the 1-on-1 King of the Court competition at the camp.

It is still very hard to believe that Mannion's college recruitment is now over, and that this will already be his last season of high school basketball, but time waits for no man, and the time has now come for the next Arizona phenom, because this one will be taking his game and his historic reputation down to Tucson to play for the CATS.

Congratulations to Mannion and his family, as well as the Pinnacle basketball program on this amazing accomplishment from our Arizona Preps' staff.