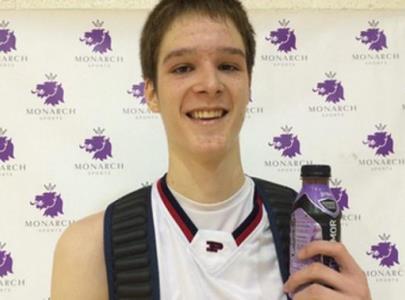 Another member of Arizona's 2016 class of prospects that really help himself this club season was Pinnacle High School's skilled 6-foot-9 senior post Nick Mains.  Mains went into the club season looking to gain exposure to college programs.  By the end of the summer he had accomplished his goal - catching the attention of many college coaches in the West.

Mains has seen his college recruitment begin to really take off, as this young man benefited nicely from the spring and summer evaluation periods - as much as any other prospect in the state of Arizona's 2016 class.

Mains is a long and very skilled wing prospect with excllent size.  He has grown over the past year, and, as a result, he looks much more attractive these days to college coaches.  It is still unclear as to whether he will play as a 3 or as a 4 in college, but that should depend heavily on which college program he chooses.  Either way, Mains will need to add considerable physical strength at the next level to make an impact, but his skill level and feel for the game is a glaring attribute that he possesses.

It is still unclear whether or not Mains has a college leader at this point, but the Air Force program's playing style would fit his skillset offensively.  It would just come down Main's decision of attending the armed forces - a big decision for a student-athlete.

Arizona Preps will continue to follow Mains' recruitment closely and bring you any updates as they continue to develop.