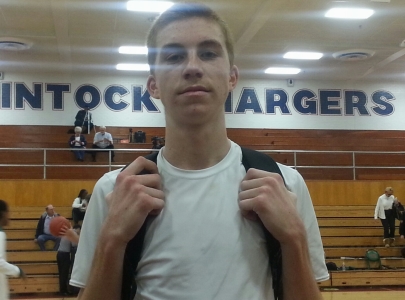 Boulder Creek High School (15-10) has returned to their winning ways this high school season, after having a drop off last season (10-17).  Second-year head coach Ryne Holstrom has implemented a fun offensive style, which allows for his team to spread the floor and shoot the basketball.  The Jaguars have been very competitive this season, and are playing their best basketball of late - winning 8 of their last 9 games on the season.

A big reason for the program's resurgence has been the play of 6-foot-4 junior guard Nick Johnson.  Johnson is the team's leading scorer this season and also a leader in several statistical categories for the team.  Johnson is one of the state's elite shooters of the basketball and a player to watch amongst the state's 2016 class of prospects.

This season, Johnson has been very consistent in leading his team each night and, in the process, has developed into one of the better players and prospects in the class.

Johnson is a deadly shooter of the basketball and is able to stretch the defense consistently with his ability to shoot the basketball.  He has excellent range on his shot and a quick release as well, which makes him difficult for opposing team's to defend. He shoots a very good percentage and is able to make shots from almost anywhere on the floor.

Johnson can hurt you with his ability to shoot the basketball, as he ranks among the best three-point shooters in the Division-I Class.  He also has a high basketball IQ, which allows him to make plays off the dribble also, as needed.  He uses pump fakes to get his defenders off balance, and then is capable of scoring from mid-range or getting to the rim.  He is a fundamentally sound performer - a good ball handler and also a good passer of the basketball with good court vision, and a willingness to get the ball to the open teammate on the floor.  A good teammate on and off the floor.

Johnson is a gym rat and enjoys working on his craft as well - a throw-back player.  He enjoys the game of basketball a great deal and should only continue to improve as a player over the next year, as he matures physically and continues to grow into his long, thin body.  Johnson also has upside as a player and should develop into a nice college prospect by this summer.

In the meantime, Johnson will look to continue to lead his sharp-shooting Boulder Creek team this high school season, as they look to make some noise in the state playoffs.  On Thursday (2/5) they will host Willow Canyon HS in their final regular season game of the season.