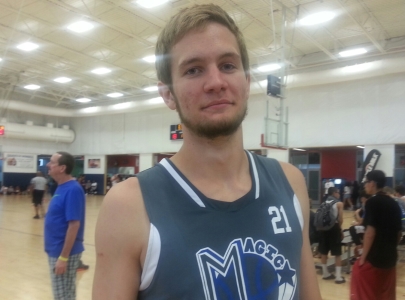 While it had looked as though Willow Canyon High School’s talented and skilled 6-foot-7 senior forward Nick Allen would be one of the more sought after recruiting targets in the West this spring, Allen has different plans in mind after enjoying his first official recruiting visit over the weekend.  Allen enjoyed his visit enough to give a verbal commitment to a mid-major plus college program in the Conference USA Conference.

With many schools looking to get involved with Allen this spring, one school stepped up early and made a commitment to Allen.  As a result, Allen would make his verbal commitment to them.  Last week, Allen received an offer from the University of Texas-San Antonio (UTSA).  Allen would quickly schedule an official recruiting visit to the school over the weekend, and would enjoy his visit enough to give a verbal commitment to head coach Brooks Thompson and his staff.

Assistant coaches Jeff Renegar and Dan O'Dowd would both be instrumental in the college recruitment of Allen, and would ultimately land the talented forward prospect.

Allen is one of the elite prospects in the state of Arizona, regardless of class, but he did not begin that way.  Entering the 2014 club season, Allen was an absolutely unknown prospect inside and outside of the state of Arizona.  But after a superb spring and summer that was filled with numerous strong performances, Allen picked up major attention and recruiting steam.

As a result of his play this club season, Allen would generate serious recruiting interest with such college programs as the University of Wyoming, Grand Canyon University and Portland State, just to name a few.

Last season as a junior, Allen averaged 15 points and 4.3 rebounds – very modest  numbers for a prospect that has now become one of the better combo forwards in the West.  Allen will look to raise those numbers considerably during his senior season.

He will still need to get some work done in the classroom to become an academic qualifier by NCAA standards, but he looks to be off to a very good start this academic year, and looks to be in good shape to qualify by year end with continued hard work.

Allen has given a verbal commitment to UTSA, but will officially sign his national letter of intent in the spring, during the late signing period.

Congratulations to Nick Allen and his family on this amazing accomplishment by this hard-working young man.  He will have a bright future ahead of himself.

Arizona Hoop Review Scouting Report:  Allen is a tough, gritty combo-forward prospect with deceiving athleticism and a high motor for himself.  Allen is at his best defensively in the post but he is also capable of defending quicker players on the perimeter as well.  He has an advanced skillset on the offensive end, which allows him to effectively score inside and out.  He is capable of scoring either with his back to the basket with a variety of offensive moves, or while facing the basket out to three-point distance where he is able to make shots consistently and also possesses excellent footwork.  A nice looking prospect with a mean streak to him.