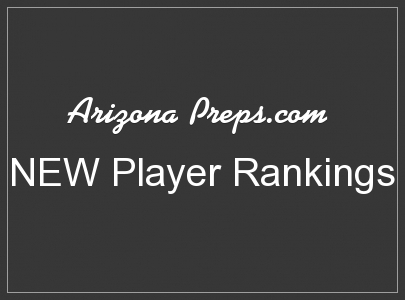 When we release our new rankings for the 2015, 2016 and 2017 classes this month, for boys and girls, there will be some serious movement in the classes from our last release of our player rankings.  Since our Arizona Preps Spring Player rankings, many prospects have emerged and even improved, while some others have been passed up.

For girls in the 2015 class, there has not been as much movement as the boys, although there is some.  Many of the previous top-rated prospects have held their positions at the top of the class, while there have been many new prospects that will enter our new player rankings.

In our new 2016 player rankings for boys, there will be some major changes as many prospects have emerged in the class, with many of these prospects competing at a high level this past spring and summer.  Look for such prospects as Gilbert Christian's Mitch Lightfoot, Basha's Devin Kirby, Gilbert's Chris Bowling and Dysart's Malik Ondigo to each make serious jumps in our new player rankings, among many others.  This class has the potential to become one of the better classes in the state's history, and mirror the 2014 class before it.

For girls, such prospects as Millennium's Raina Perez, Valley Vista's Jordenn Reible and Mountain Pointe's Tilasha Okey will each see strong improvements in their rankings in the class.

We will also introduce our 2017 class player rankings - a very loaded class of prospects on the boys side and a class with star power on the girl's end of things.  Such prospects as Perry's Markus Howard, St. Mary's Marcus Shavers, Westview's Justice Sueing and Desert Vista's Caleb Simmons will lead the class, while Valley Vista's Kiara Edwards and Gilbert Christian's Lauren Satterwhite will lead the class rankings on the girl's side.

Look for our new Arizona Preps player rankings to begin this week, first with the release of the rankings for the 2015 class.