Nevada Offer A Big One For Henry 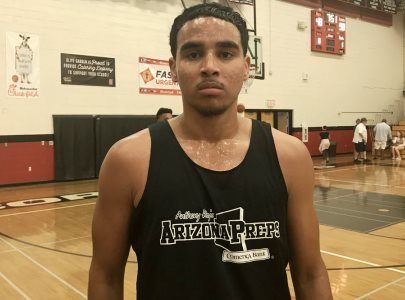 One of the top overall prospects in Arizona's 2020 Class is PHHoenix Prep hardworking and tough 6-foot-8, 250-pound senior forward DeAndre Henry. Henry recently decided to leave Mountain Pointe High School and transfer to the new local prep program, PHHoenix Prep, where he will team up with many of his local club teammates from the Powerhouse Hoops club program. Last week, while playing very well in the NCAA Basketball Academy, Henry picked up his biggest offer to date from the University of Nevada.

Former UCLA Head Coach, and now new first-year University of Nevada Head Coach Steve Alford, has made his commitment to recruiting some of Arizona's best basketball talent for his new program. After recently receiving a verbal commitment from PHH Prep's Alem Huseinovic, Alford and his staff have now turned their sights on Henry - extending an offer to the bruising power forward prospect while he was playing in the NCAA sponsored event last week.

"They gave me the phone and it was Nevada," said Henry. "They offered me a scholarship and I was like the University of Nevada?" I was very happy with that offer," said Henry at the NCAA event last week, after receiving the offer.

It is still unclear as to whether Henry will jump on his new biggest offer, or when he will make his college decision. Henry also has received offers from Air Force, North Carolina A&T, Portland State, Northern Arizona and South Dakota, thus far.

While playing for his club program, Powerhouse Hoops Elite 17U Elite, this spring and summer, Henry saw his recruitment soar and go to completely another level - becoming one of the hottest prospects currently in Arizona's 2020 Class.

Henry is a strong, two-sport star athlete, and chose to play college basketball over a career in football, even though he is one of the top college football prospects in the country.  Henry chose basketball even though he was being recruited by the very best football programs in the country, including Alabama.  His love and passion for basketball outweighed his love for the sport of football, and it is really paying off for the talented forward prospect.

After a sophomore season where he helped his Mountain Pointe program to a 6A state runner-up finish, last season Henry averaged 9.4 points and 8.4 rebounds per/game for the Pride, as the team finished with a 22-7 overall record this season, before falling to Perry HS in the 6A state playoffs.  Henry chose to recently transfer from Mountain Pointe HS, and will finish his senior season at a new local prep program, PHHoenix Prep, a prep program organized by the organizers of the Powerhouse Hoops club program.

I will continue to follow the recruitment of Henry closely, and bring you updates as they continue to develop.

Arizona Hoop Review Scouting Report:  DeAndre is a very intriguing prospect as a four-man, as he is a tough customer with a hard-nosed approach to the game.  A big, strong and athletic performer who plays with a very high motor.  He’s a tough, gritty player who can really affect the game on both ends of the floor.  He’s a capable shooter from mid-range, but is very effective finishing around the rim, as he has a soft touch and advanced footwork.  A strong offensive rebounder that plays with a gritty style of play, and is active on the glass on both ends of the floor.  A strong competitor that accepts challenges on the court.  Runs the floor hard.  A strong finisher at the rim, and gets to the free-throw line quite often.  Enjoys physical contact.  A strong shotblocker.  A good passer out of the low post.  Capable of guarding multiple positions defensively.  Look for his stock to rise all summer, as he’s already receiving a lot of interest from D-I programs.