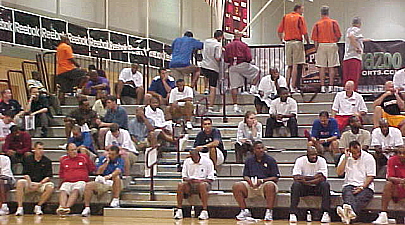 The spring and summer in 2019 will be much different than year's past for high school student-athletes and college coaches around the country, as the significant impact of the NCAA's immediate rule changes will completely change the recruiting process this recruiting season.  Gone will be spring and summer evaluation periods as we know them, atleast for this year, until the NCAA get's it figured out in the future.  As a result of the previous FBI findings and investigations that completely disrupted college basketball a year ago, the NCAA has made some major changes to the evaluation and recruiting periods that will make it much more difficult for prospects across the country to raise their recruitment, or even be recruited this club season.

Previously, unsigned seniors looked toward the spring as an opportunity to get one last look by college coaches, and it worked, as many prospects around the country raised their recruiting stock with strong performances.  It will be very difficult this spring, as the NCAA has reduced the available evaluation period for division-I coaches to be out at NCAA approved events to a mere (3) days - April 26 - 28th, one weekend in the spring.  With many events across the country taking place on those same (3) days, the events that division-I college coaches will actually be at will be scarce.  While the elite prospects in America will, no doubt, still be seen, it will be very difficult for lesser known prospects that are not are highly coveted club programs to get a look.

Since most shoe-sponsored club programs feature prospects that are juniors and younger, it will be a very difficult process for unsigned seniors this spring to gain attention.  Instead, division-I college coaches looking to fill their rosters for the fall of 2019, will have to rely heavily on the internet, scouts and media to help make their decisions on players.  Limited school budgets and NCAA rules only allow for so many college coaches to be out on the road at one particular time, so the particular events they attend throughout the (3) day evaluation period will be crucial to their immediate recruiting success.

Instead, the recruiting period will be extended for college coaches, but coaches will only be permitted to evaluate prospects at their academic institutions, so each coach's knowledge and understanding of who to spend their time evaluating will be vital in the recruiting process.  College programs are also limited in their number of recruiting days and official visits they can extend to prospects, so it will be a very important evaluation process that will need to take place for each college program before they commit to hitting the road.

While the spring has always been important to student-athletes to also position themselves for a big summer evaluation period, the summer eval period has also been significantly condensed as well - from (3) weeks in July, down to (4) days in July for club programs (July 11 - 14th).  Instead, the NCAA now has opened up (14) days of the evaluation period for scholastic events approved by the National Federation of State High School Associations, or a two-year college athletics governing body (i.e., NJCAA, CCCAA, NWAC).

As a result of these major changes by the NCAA, prospects will now need to look forward competing for their particular high school programs in June, in hopes of landing a scholarship offer and raising their college recruitment.  Because many top-rated prospects historically dominate the action on their respective high school teams, this change will improve the recruitment and exposure of these prospects.  Dominant shoe-sponsored club programs often feature numerous division-I prospects, making it difficult for top prospects to get off.  This change will make top-rated prospects look much more dominant than they truly may be - resulting in a good change for the prospect, but making it much more difficult for college programs to evaluate each player.  Unless the high school teams are facing stiff competition, top prospects may show enhanced results that will be difficult for college programs to evaluate.

The NCAA will also organize their own NCAA Youth Development
Camps in July over a (5) day period (July 23-28), which will be organized and conducted by the NCAA and member schools/conferences.  It is still unclear as to where these camps will be held, but it has been indicated previously that these camps will be invitation camps for top prospects - making it difficult for true "sleeper prospects" to emerge.

As another exciting 2018-2019 high school basketball season nears it's end, the start of a new and very much changed club season will begin.  Except, this year, it will not be known as just a club season.  Instead it will become a high school and club season, with both club teams and high school programs sharing the spotlight.  Get ready.

Evaluation period June 13-14 at NBPA Top 100 Camp, a new collaboration between the NCAA and NBPA.

Evaluation period July 11-14 at NCAA-certified non-scholastic events, a reduction in evaluation periods at these events from three weekends in July to one weekend in July.