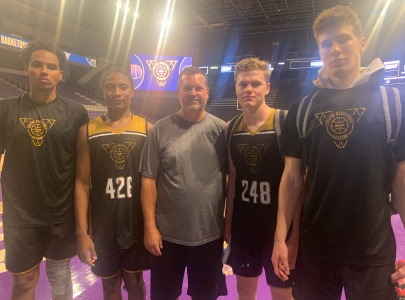 The NCAA recently created a new era in recruiting of high school student-athletes across the country, as the NCAA instituted new legislation - comprising (4) different basketball academies throughout the United States, during the NCAA July Evaluation Period for Division-I college coaches to evaluate top-rated basketball talent. As a result, more than 300 different college prospects from around the country organized at Grand Canyon University to take part in the West Regional Academy.

Unfortunately for the state of Arizona's top basketball talent, there were not more participants from the state, as the NCAA implemented a selection process in their first year of the event, that was much less than perfect or even sufficient. There were only a mere (12) total Arizona prospects in last week's camp, out of more than 300 different prospects in attendance.

The NCAA received a lot of crticism from college coaches about the event and it's lack of overall talent being showcased in the event. In the first year of this new recruiting process, and with the event being held in Arizona, it would have made much more sense for the NCAA to ensure that our state's top players and coaches were in the event. Because our state now has loads of division-I talent in it, this would have been a huge win for the NCAA and their pursuit to change the recruiting landscape around the country. Atleast get the support of the state where you are hosting the event. But the NCAA, who spent $8 million on these (4) Academy's across the country, instead acted without much thought of such an action, as the event took place in the best manner that it could - given the circumstances.

The event ran for (6) days and included prospects from (13) different state across the United States. The Arizona Preps' staff was in attendance for the week to cover the entire event, and each of our staff were impressed with the performances of many of the Arizona prospects that were in action. Led by the performances of Cesar Chavez HS junior guard Ty Ty Washington, AZ Compass Prep junior wing Maxwell Lewis, PHH Prep's senior forward DeAndre Henry and senior guard Jake Murphy, Rancho Solano's Hunter Ruck, Sunnyslope's Carshon Basham, Mountain Pointe's Jason Kimbrough and Peoria's junior forward Kevin Kobara. Each of these Arizona prospects competed well in the event and held their own against the camp's best prospects

Throughout the event, Ty Washington earned an offer from TCU, while Lewis received offers from Washington State and TCU. DeAndre Henry brought home his biggist offer to date from the University of Nevada, while Basham raised many eyebrows from college programs at every level in attendance with his promise as a post prospect for the future.

Overall, the experience for the Arizona participants was strong and each of these young men were able to benefit from the opportunity to play in front of so many college coaches, as many college programs, from all levels scoured the GCU gymnasium, reviewing their rosters and hoping to land a lesser known top performing prospect from the camp. More involvement from top-rated local Arizona prospects would have certainly helped with this fact, as there are so many top prospects in the state today. The NCAA missed it this year, but I expect they will definitely improve this product and make up the difference next year and in the future. The NCAA is committed to this product and, after forking over $2 million to create the Arizona Academy, it is definitely a process that is here to stay. Hopefully in the future when the NCAA comes to Arizona for an event, we will be a mugh bigger part of the process.