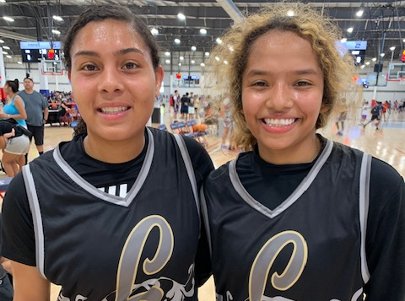 Day 2 and 3 of the Native American Nationals brought a lot of exciting action as Regional and National Scouts were wowed by strong performances from top prospects. Tribe Athletics has solidified itself as a fantastic prospecting patch for hidden gem prospects who are highly skilled and compete at a high level. There were bundles of solid low to mid major prospects on the girls side, and here are some of the top prospects who caught my eye . . .

Anitielu is a Scottsdale College commit who is a hidden gem out of Farmington High School in New Mexico. Scottsdale got a steal as Anitielu is a walking bucket. Her play reminds me of Allen Iverson as she has a great ability to break down defenses to open up scoring opportunities to her teammates or herself. She is a three level scorer and a high level defender. I anticipate her stock to skyrocket if she can keep averaging her high stat line.

Great looking prospect with good mid major potential. She is a crafty guard who surveys the floor well, gets her teammates involved and can slice and dice defenses. Keats can score at all three levels and has tight handles. Her explosive athleticism makes her one of the better on ball defenders of the event. Jones College got a fantastic steal with Keats committing to play there, mid major colleges should keep an eye out as Keats will be a hot commodity for 4 year schools in the upcoming years.

Parker is another sleeper prospect.  College coaches need to wake up as she has mid-major plus potential. One of the elite prospects as she is highly skilled with a high IQ. I like the way she knows how to utilize a pick and roll and her decision making on both ends of the floor. She has a tight handle, smooth shooting stroke and converts from all three levels.

Estes is another sleeper prospect with low major plus potential. She is a three level scorer who has a solid platform to build on as she is strong and athletic. I like her ability to get into the post to set up her defender and score. Estes has great footwork and tremendous upside.

Hunter is a tough prospect who has tremendous upside on both ends of the floor. I like her ability to create for herself or her teammates. College coaches should get this lady on your radar, as she is very skilled and has a high IQ. Hunter could play at the mid-major level.