Nathan Calmese Is A Slick Prospect 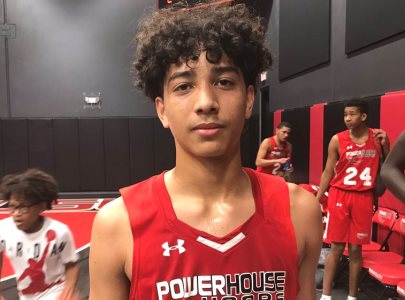 Mesquite High School's very skilled and talented 6-foot-2, 160-pound sophomore guard Nathan Calmese is a slick guard prospect that college programs are already taking a hard look at. Calmese is an elite point guard prospect in Arizona's 2022 Class, and he has his Mesquite team off to a good start this high school season.

Mesquite (5-5) was coming off a big 77-75 win over 4A defending state champion Shadow Mountain HS on Friday evening, when they faced St. Mary's HS on the road Monday evening. After an early, double-digit lead of the Knights in the first half, behind the strong play of Calmese, St. Mary's would use a big run in the second period to overcome Mesquite, 63-50.

I had the opportunity to observe Calmese in action on Monday evening, and was again very impressed with his ability to play the game - making it look easy as he finds his open teammates on the floor and also creates scoring opportunities for himself and others off the dribble, while also possessing a pure shooting stroke with range, which makes him difficult to defend. Calmese is a pure point guard prospect with a serious knack for scoring the basketball, when he makes up his mind to score. He is a difficult guard for opposing guards, as he very slick with the basketball in his hands, and is able to make plays for himself and others, almost at will. He also has quick hands and feet and excellent length of body for his size, and he looks to be still growing a great deal as well, so he could grow to 6-3 or 6-4 in heigth, before he stops growing.

Calmese already has one offer to his credit from UC-Santa Barbara, and offer he received this off-season after playing very well on the club circuit with his club program, Powerhouse Hoops. Look for many more college programs to begin recruiting Calmese over time, as they see him perform, as he is a glaring prospect with excellent promise over time.

Calmese comes from excellent athletic bloodlines, as he is the son of Greg Calmese, a standout football player for Moon Valley High School in the late 1980's, and also the nephew of former Moon Valley HS football and basketball standout Michael Calmese (1987 graduate). I actually went to high school with his father Greg, and know the Calmese family very well. This young man is another terrific athlete from the family, and will make them very proud over time.