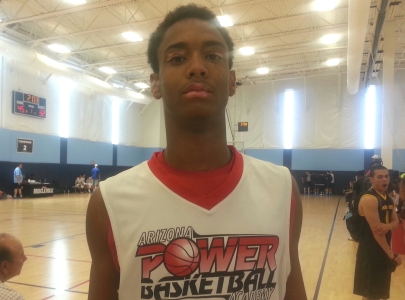 One of the elite prospects in Arizona's 2015 class of seniors is Tucson’s Sahuaro High School’s athletic 6-foot-7, 170-pound senior forward Nate Renfro.  Renfro really helped himself last spring with his play and, as a result, saw his college recruitment take off - leading to a commitment and signing with Grand Canyon University in the fall.

This week, Renfro and Grand Canyon decided to part ways - leading Renfro back to the list of unsigned recruits in the state's 2015 class, and a hot prospect for mid-major college programs.

According to sources close to the GCU program, Renfro and GCU decided to mutually part ways, as Grand Canyon will look to use the scholarship set aside for Renfro on a post prospect instead.  The Grand Canyon coaching staff has indicated to me that they have now changed their recruiting philosophy, and may be looking for a different type of prospect this spring.

Renfro should see a nice share of college recruitment now this spring.  He previously chose Grand Canyon over offers from Cal Poly, Northern Colorado and Northern Arizona University.  He was also receiving interest from Harvard due to his high academic abilities.

Renfro rose to the top of Arizona’s 2015 class as one of the elite overall prospects in the group.  Renfro’s emergence last spring (2014) as a top-rated prospect in the class benefited him nicely in his college recruitment.

Arizona Hoop Review Scouting Report:  Renfro really gets a large majority of his points around the basket due to how versatile he is.  He also possesses a good overall motor.  Renfro runs the floor very well for someone his size and is always in the right place at the right time to get points around the basket off of a put-back, or from his point guard finding him in transition.  When Renfro has the ball in a half-court set, he scores by using his long strides to initially beat his defender and finish well over, or around them once he is in the paint – a nice attribute for him.  His length and athleticism are glaring and make him an attractive prospects for many college programs.  Renfro’s jumper is solid and can extend out to the 3-point line, where he is capable of being effective at a good rate.  He is at his best from mid-range though.  As a he continues to become much more consistent from deep range, he will really take his game to another level.  Renfro is an active rebounder and shot blocker, altering many shots that come his way due to his length on the defensive end.  Renfro is a nice looking small forward prospect, although he saw his time for Sahuaro HS as a post player, due to his length and ability to score around the basket.  He will have his best success as a 3 in the college ranks – depending on the level his decides on for college.   The best attribute of Renfro is that he has glaring upside, and will see his best years of basketball well ahead of him.