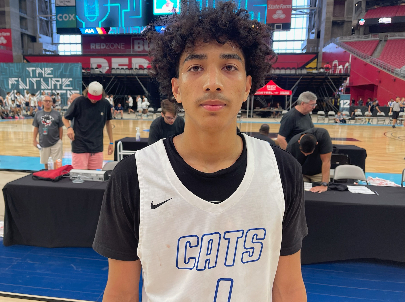 With the 2021-2022 high school basketball season now upon us, and set to get going in a major way next week, as pre-season basketball tournaments will begin kicking off next week for boys and girls basketball in the state, there are numerous prospects that will look to have big seasons for themselves. This up-and-coming high school basketball season is already exciting, as it will be a much more normal experience, after a serious COVID-stricken season last year made it difficult for players, teams and spectators to navigate and observe. Many of the state's top overall prospects in the 2022 senior class decided to make their college decisions this fall - leaving some very good prospects still on the table for college programs to pursue and take a hard look at this high school season. One of the state's elite overall prospects that will have a tremendous senior season is Mesquite High School's gifted 6-foot-3, 170-pound senior guard Nate Calmese. Calmese is a superb talent and is coming off a strong spring and summer for himself- setting himself up to have a huge senior season.

There is not a better overall guard prospect in the state, regardless of class, than this young man, as he has proven himself consistently as one of state's best overall talents. Calmese has had a very strong high school basketball career in the state already, and torched his competition this past spring and summer on the club circuit in numerous events and also the exciting Section 7 event in Phoenix. While it was thought by our staff that Calmese would already be off the recruiting board by now, he returns for his senior season as a player and college prospect with something to prove. Trust me, this young man is set to have a tremendous senior season while leading a much more experienced Mesquite team in the 4A Division.

Last season as a junior, Calmese was one of the state's elite talents - averaging 17.2 points, 4.3 rebounds and 2.6 assists per/game. I completely expect these numbers to improve a great deal this high school season, as he should be one of the, if not the highest scoring guard prospect in the state this high school season. Look for Calmese to rip the nets every night while leading a talented Mesquite group to the top of the 4A standings.

Currently, Calmese has offers on the table from Nevada, UC-Santa Barbara and Portland State, but each of those offers came more than a year ago, and is still unclear as to whether he still has them or not, although he is well deserving of them and many more offers. We should see a dramatic improvement in his college recruitment this hig hschool season, as he puts up tremendous overall numbers on the season, and proves just how valuable a guard prospect that he is. This young man is a superb talent that can play both guard positions, score at a high level and also is a strong facilitator with the basketball - playing unselfish and doing whatever it takes to help his team win. He has improved a great deal in this area of his game over the past two seasons.

Calmese is a unique guard prospect, as he is a terrific combo-guard prospect that enjoys having the basketball in his hands and making plays from either guard position. He has an excellent feel for the game and can make plays at ease, as a scorer or as a facilitator. His natural position though is as a point guard, so don't let his unique scoring prowess fool you. He is at his best as a point guard, where he is a handful for opposing guards to defend. Calmese has a pure shooting stroke with range, but is at his best hen scoring off the dribble, where he has a strong handle of the basketball and is able to create off the dribble at a high level. He is always looking to make a play, which often times leads to scoring opportunities for his teammates. A very unselfish performer, Calmese makes players around him much better, and is a winner. He is also an excellent defender with quick hands and feet, and has excellent anticipation on the floor, which allows him to play passing lanes and put pressure on opposing guards. He is also a very good rebounder from the guard position, as a result of his good size as a guard, and competitiveness. He is a winner and is willing to do whatever it takes to win.

I am excited to watch Calmese this high school season, as he should be a handful for opposing teams and a joy to watch perform in his final senior season. Get your popcorn ready, as Calmese should put up serious numbers and see his college recruitment finally begin to soar in preparation for a spring college decision.