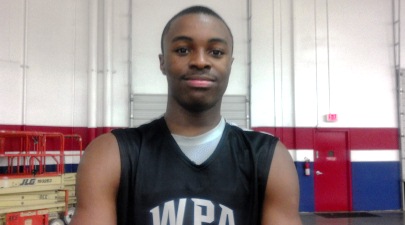 When 7-foot, 215-pound senior post player Namdi Okonkwo traveled to the state of Arizona this fall from Dallas, Texas, he was as raw a basketball talent as there is - a long, gangly athletic post with very little organized basketball experience.  A lot has changed in a short period of time for this young man.

As a senior post player for Westwind Prep Academy's National Team, Okonkwo has developed a great deal physically and mentally this basketball season - going from a defensive-minded post player with very raw offensive skills, to a now capable offensive talent with excellent defensive timing and athletic prowess.  This has been Okonkwo's first true season of organized basketball, after not playing at his high school in Texas.  As a result, this young man has truely blossomed into a serious division-I post prospect that is now worthy of mid to high-major college recruitment.

With so few college prospects available on the West Coast currently that have any true size for the post position, Namdi is among the top unsigned post prospects in the West - a quality that should have him receiving serious attention from numerous college programs in the very near future.

Currently, Okonkwo has received one division-I offer from North Carolina A&T, and is getting strong interest from such schools as Nevada, Wyoming, Pacific, Portland, Eastern Washington and Sacramento State.

This weekend, while playing with his Westwind Prep Academy group in the Southwest Prep Showcase at Inspire Courts, and amongst some stiff prep competition in the event, Okonkwo showed very well in the event - showing serious improvement as a player from a short time ago, when he arrived at Westwind Prep.  Okonkwo ran the floor very well, blocked and changed numerous shots and finished strong at the rim.

Okonkwo helped lead his Westwind Prep team to two blowout victories in the event, and will lead them on Sunday in the tournament's bracket rounds - hoping to win the event against serious prep competition.

Arizona Preps will continue to follow the recruitment of Nambi closely this spring, and bring you any recruiting updates as they begin to develop.