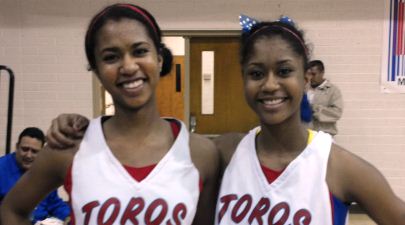 Mesa Mountain View and Desert Vista High School's girl's basketball programs are two of the top programs in the state, and both programs are on pace again for another exciting conclusion to the high school season.

Both of this year's two teams also faired very well in the recent Nike Tournament of Champions, as Mountain View (18-2) won this year's Desper Division Championship, and Desert Vista (18-4) would fall in the championship game of the Gray Division.

With both teams matching up Thursday evening, #3 ranked Mountain View would look to make a statement, while #7 ranked Desert Vista would look to get a big road win in a week where they will also face #2 ranked Chandler HS.

Mountain View would build a quick advantage in the game, as they would lead 7-0 behind 5 quick points from talented 5-foot-6 freshman guard Sabrina Haines.

Desert Vista would quickly get back in the game behind the intensity of head coach Rachel Proudfoot - pushing her team to fight. Desert Vista would storm back and take the game's lead, 16-15, with 1:47 left to play in the first period after an offensive rebound and putback from 5-foot-7 junior guard Kylie Butler.

After another offensive put-back late in the period by 6-foot-2 senior post Tinisha Toussaint (Weber State signee), DV would take a 20-19 advantage after one quarter.

Mountain View would regain the game's momentum and the lead late in the second period, after two consecutive baskets inside from 6-foot-2 junior post Jordan Jensen. A third consecutive basket by Jensen would give the Toros a 27-22 lead with 2:54 left to play in the half.

A contested floater from the wing by gifted 6-foot-1 freshman guard Armani Hawkins would give Mountain View a 29-24 lead with :25 seconds left to play in the half.

Mountain View would take a 30-26 lead into the half.

Mountain View would look to build their lead in the game's third period, but the play of Kylie Butler would keep the Thunder within reach for much of the period. A pair of tough baskets by Butler would keep DV within two points, 39-37 with 3:47 left to play in the third.

DV would then tie the score at 39 on the next play after an offensive rebound and score from 6-foot-1 senior forward Jaymee Brugman.

After building a 48-43 advantage, Kylie Butler would convert another driving layup just before the buzzer to bring her team within 3 points - 48-45 at the end of three periods.

Mesa Mountain View would then go to work in the game's fourth period. An assist from Armani Hawkins on the break to Jordan Jensen with 5:05 left to play in the game would cap off a 9-0 run for the Toros.

After a timeout by Desert Vista, the run would be too much for the Thunder to recover from, as Mountain View would outscore DV 22-11 in the game's fourth period to win the game.

Mountain View will now have a break until they host Marcos de Niza next Tuesday (1/24), while Desert Vista will have to travel to #2 ranked Chandler HS tonight (Friday evening).

Broncos Charging Their Way Into State