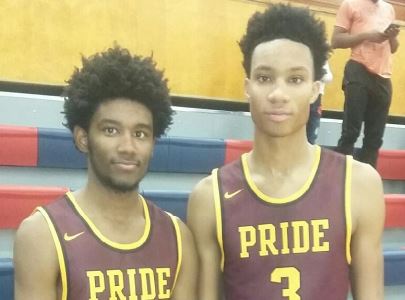 This pre-season when I predicted that the Mountain Pointe Pride would reach the 6A state semi-finals, and would have a chance to win it all this high school season, I had did so understanding the impact that first-year head coach Duane Eason would make on the program.  While I knew that Eason's impact on the program would be immense, no one could have known that it would have been as impactful as it has been.  Behind the leadership of Eason and a very experienced staff, which includes my close friend and longtime Arizona Preps' supporter Kirk Fauske, Mountain Pointe has compiled an almost flawless season - building a terrific 20-1 record that has everyone watching closely.

Eason, a former college coach and a native of New Jersey, comes from a tough, hard-nosed background where basketball players play for the love of the game and for a better life.  In New Jersey, for some kids, if they don't go to school on a daily basis, they don't eat.  The game of basketball is not just an option for many kids on the East Coast, instead, for many, it is the only way for an opportunity at a better life.  It is this type of hunger to play the game that Eason has brought with him to the state of Arizona.

After spending a year as an assistant coach at the very successful Phoenix College basketball program a year ago, Eason decided to take over a strong Mountain Pointe program last spring, when the program's head coaching position became available.

The Mountain Pointe basketball program was most recently developed by one of the state's best ever high school coaches, Hoseah Graham - one of my favorite people and coaches in Arizona basketball history.  Graham decided to retire, which was well deserved after all he did for Arizona high school basketball.  Mountain Pointe also had other top-rated coaches over the years such as Brian Fleming, and also Sam Ballard, one of the state's winningest coaches of all time and current Mesa JC head coach.

Eason is now another gifted head coach to take over the program, and he is off to an amazing start in his tenure.

The Mountain Pointe basketball program has always been known having athletes with excellent toughness, as the program always has a good balance of basketball and football prospects on their teams.  This attribute is just the balance needed for an Eason team, as he works hard to teach toughness and defense to his players; if the offense is not clicking, don't worry because your defense can always be on point.  This defensive focus has been a major key to the success of this season's Mountain Pointe team.

The biggest win of the season though came in December in a huge 87-85 overtime win over Desert Vista at home, which was the Thunder's first loss of the season to a team in state.  Mountain Pointe's only season loss came at the hands of a very good Brophy Prep team earlier this season, 61-62.

Mountain Pointe will meet up again with Desert Vista on Tuesday (1/23) at Desert Vista, in what will be one of the most exciting contests of the high school season, and what should develop into one of the best games of the season as well.  Desert Vista will be looking to get revenge from Mountain Pointe, and also looking to get back on the winning track after their loss on Friday to Hamilton HS.  Mountain Pointe will be looking to prove that they are the better team, and ready to win a 6A State Championship - not just get to the state semi-finals or final game, but win it all.

In this story, I will not talk about the key players that have produced at a high level for the Pride this season, as there are many - led by the superb play this season of 5-foot-9 junior guard Khalid Price (pictured left) and 6-foot-4 senior guard Amarion Cash (pictured right).  Both players have raised their overall play and recruiting stock under the leadership of Eason.  Instead I have focused on the amazing job that Duane Eason and his staff have done this high school season.  Winning is always fun - defense is not.  Work hard and play hard, so that we can enjoy the end result - winning.  This is the attitude that Eason has brought to the Mountain Pointe basketball program.  If you don't work, you don't eat.

Congratulations to Coach Eason, his staff and his team on an amazing season thus far.  You have made believers out of everyone in the Arizona basketball community.