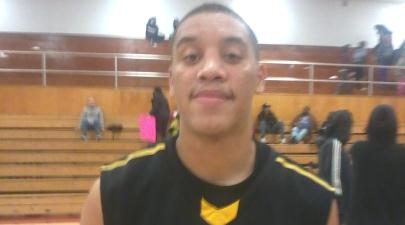 Mountain Pointe High School (11-8) has been up and down all season long, but is headed in the right direction at the right time of the season.  After receiving some serious help recently from the addition of several football prospects to this year's group of talented players, the Pride has won their last four games of the season and with their biggest win of the season coming Tuesday evening in a big 49-47 win over visiting Mesa High School (18-4).

Behind the strong play of 6-foot-6, 195-pound junior transfer forward Chris Davis, the Pride now have a loaded athletic group of players that are primed and ready to compete with the state's best.  Davis sat out last season at Desert Mountain High School due to AIA transfer rules, then  decided to transfer again to Mountain Pointe this season - where he has flourished as a player under new head coach Aaron Windler.  Davis is now regarded among the top prospects in Arizona's very loaded 2014 junior class.

On Tuesday evening, after being down four points to Mesa at halftime, 27-23, and also down to Mesa after three quarters, 35-34, Mountain put it all together in the fourth period behind a well-balanced attack.

With 6:58 left to play in the game, 6-foot-3 junior forward Emmanuel Butler scored on a basket inside the paint to put Mountain Pointe ahead by one point, 36-35.  With 6 minutes left to play, Davis would collect an offensive rebound and score inside to put the Pride ahead 39-37.  Then with 4:58 to play, 6-foot-1 senior guard Khari Holloway would score on a three-point attempt from the wing, before an offensive tap in off a missed shot by a teammate by 6-foot-4 junior forward Jalen Brown.  Brown, one of the state's hottest football prospects, would climb high above the rim on the play and put his team ahead 45-38 - their biggest lead of the game.

Mesa would close the gap late after a three-pointer from 6-foot-2 senior guard Dan Richards.  Mesa would then tie the game with 1:47 left to play after two free-throws from 6-foot-4 sophomore point guard Jaylen Jenkins.

After two free throws from Khari Holloway would put Mountain Pointe back ahead by two points, 6-foot-1 senior guard DJ Henderson would tie the game again at 47 all on a mid-range jumper.

With Mountain Pointe ahead 49-47, Mesa would throw the basketball the length of the court with :02 seconds left to play, only to have 6-foot-11 junior post Isaac Allen miss a turn-around jump shot from 18 feet - giving Mountain Pointe the narrow but big victory.

Mountain Pointe will now face the one of the state's hottest division-I teams on Thursday evening - Corona Del Sol.  Corona has won their last 7 games on the season and look to be the early favorite to repeat as Division-I state champions this season.  It will be another big test for a Mountain Pointe team that is as talented a team as there is in the state - loaded with physical, athletic talent at the right time of the season.  This Mountain Pointe team, while not having as good a record as many other top-rated teams in the state, has the toughness, athleticism and depth to compete with any team in the state.

Look for the Pride, led by a talented coaching staff, which includes former Mesquite HS head coach Tom Salzstein, to go deep into the state playoffs this post-season.  Look out, as this team will upset someone for sure in the state playoffs.