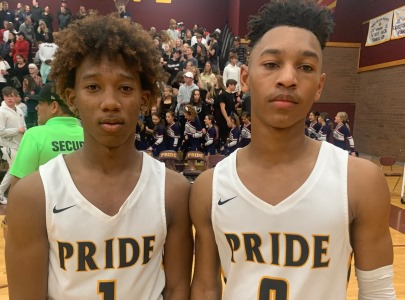 Last season was a very different story for #14 seed Pinnacle High School and #11 seed Mountain Pointe. Two-time 6A State Champion Pinnacle had been the class of the state over the past two seasons, while they were led by superstar guard Nico Mannion. Mountain Pointe lost in the 6A Finals to Pinnacle in their first championship run, and were led by the overall play of Jalen Graham. Mannion is now a star performer for the University of Arizona, while Graham is developing into a young star for Arizona State University.

Last high school season, when these two programs met, it was a blowout victory for The Pride on Mountain Pointe's home floor (76-59), as Graham dominated the contest. Both programs were #1 and #2 in the state at the time. On Saturday evening, when both teams faced each other in the 6A State Quarterfinals on Mountain Pointe's home floor again, the two programs would look much different. Pinnacle now led by the overall play of 6-foot junior guard Marcus Libman and 6-foot-10 senior post Tosh Baker (Notre Dame signee-football) and Mountain Pointe led by their dynamic backcourt of 6-foot junior guard Jason Kimbrough and 5-foot-11 freshman guard Mark Brown.

Mountain Pointe would hold on to a narrow 17-14 lead after the first period, in a very competitive first quarter. In the second period, 6-foot senior guard Tevora "TJ" Tigler would finish a driving layup, and then receive an assist on the break from Kimbrough only to finish off another layup after being fouled on the play - giving Mountain Pointe an 18-17 lead early in the second period.

Tosh Baker would get it going in the post for Pinnacle in the second period. Baker's basket inside the paint and then another finish by Baker with the left hand, would give Pinnacle a nice lead with 6 minutes left to play in the half, 26-18.

In the third period, Mountain Pointe would continue with the game's momentum, and would force the issue to look for a stronger advantage in the game. A backdoor layup by 6-foot-1 sophomore guard Anthony Jaramillo, then a three-pointer from Kimbrough, after making his defender fall, would ignite the home crowd. Kimbrough would continue his terrific play with a nice floater in the lane, and then an impressive dribble move, which resulted in a basketball and a foul for Kimbrough with 1:43 left to play in the period.

With all the excitment going on, Pinnacle hung in there behind their overall team play, led by Marcus Libman. A Libman driving basket around a defender late in the third period would give Pinnacle back the lead late in the quarter, and Pinnacle would take a 61-60 advantage into the final period.

In the final period, Mark Brown's mid-range jumper from the short corner with 6 minutes left to go would give The Pride a 64-61 lead and back the game's momentum from Pinnacle. After a layup in transition from TJ Tigler, a steal and layup from sharp-shooting 6-foot-3 senior guard Miles Sulka, another strong driving layup around a defender from Kimbrough, and then a basket and a foul inside by 6-foot-8, 225-pound senior post Zereoue Williams, and Mountain Pointe would climb to a 75-67 lead.

Mountain Pointe would pull out the 82-73 home win - advancing to the 6A Semi-finals, where they will now fac a very talented #7 seed Chandler HS.