Moses Demalek A 2021 Prospect On The Rise 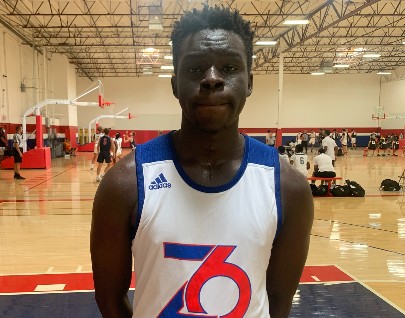 Arizona's 2021 Class of prospects missed out a great deal on the impact of a spring and summer NCAA Evaluation Period (2020) that would have benefited many college prospects, but instead was taken away by the COVID-19 pandemic. We have addressed many of these prospects on Arizona Preps. Another prospect in the class that would have benefited a great deal from the exposure to college coaches is Paradise Valley High School's 6-foot-6 senior forward Moses Demalek. Demalek is a skilled and lengthy wing prospect that can play multiple positions on the floor, and has already received some college interest, but is well deserving of much more.

Demalek is a very intriguing prospect that has excellent potential and upside, combined with a nice overall skill-set, which allows him to make plays for himself and others from anywhere on the floor. Demalek has excellent versatility on the court, and is able to play multiple positions for his team, making him a very valuable performer to any team he plays for. Demalek can handle the basketball and create off the dribble for himself and others, which puts serious pressure on opposing defenses. He is also a winner that competes on both ends of the floor, and plays with a purpose - playing to win.

While he missed out on some serious recruitment for himself this spring and summer, Demalek has received an offer from Colorado State-Pueblo, and has received serious interest thus far from UC-Riverside, Northern Arizona, Houston Baptist, University of Missouri-Saint Louis, Western New Mexico and Eastern New Mexico.

Demalek is receiving interest at the right level for himself, as he should be a prospect that will be able to play early in college, as he plays on both ends of the floor and is capable of impacting the game and numerous different ways - either on the glass, defensively, facilitating for others or while scoring himself.

Demalek should become one of the better recruiting targets in the 2021 Class this spring, after another strong season for a talented Paradise Valley HS team that returns half of last year's group that finished with a 20-8 overall record in the state's 5A Division. Paradise Valley will be a strong contender this season to go deep into the 5A State Playoffs, and contend for a state title. Demalek will be the catalyst this season, after averaging 12 points, 7.6 rebounds and 4.2 assists as a junior.

I became very impressed with Demalek as a player and college prospect during his sophomore season, and was very impressed with his play on Saturday in Gerry Freitas' End of Summer Showcase at Inspire Courts. On the day, Demalek was very impressive as he led his Zone 6 club program in both games I observed, which included a strong performance in his team's narrow loss to The Show All-Stars, a loaded team built of some of Arizona's top 2021 and 2022 prospects. Demalek's versatility and overall play on both ends of the floor was glaring in his team's narrow defeat.

I will be keeping a very close eye on Demalek's college recruitment throughout the high school season, and look forward to seeing this young man lead a talented Paradise Valley HS team this season in the state's 5A Division.