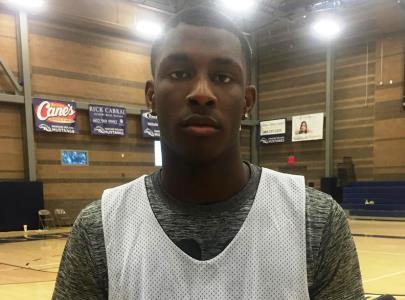 The exciting Hoop Hall West took place this past weekend at Chaparral High School in Scottsdale, Arizona, and there were many top individual performers in the event.  While the Arizona Preps' staff was in full force for this year's event, here are more of the top performers that were seen and evaluated by Arizona Preps' staff writer Derek "DJ" James over the weekend (In no particular order) . . .

This is one of the smartest guards in the West.  He literally plays both sides of the court with so much heart!  In my opinion he plays real defense with his feet.  He’s really good at reading the player and beating them to their spot.  He is also really good at reading the pass and playing the passing lanes.  He is really good at finding his teammates on offense, and is a very good ball handler and communicator on the court.  He is still overlooked because of his size.  Regardless of his size though, this kid can play at the higher level.  He’s a special player and had a really good tournament this weekend.  He has proved himself to be one of the top guards in the West.  He’s not a knock-down shooter, but can definitely hit the mid-range and three-point shot consistently.  He is a pass-first guard, but will score if he needs to.

This is a pure-scoring guard.  He can score in so many different ways.  He plays very free, which I feel makes him difficult to guard. He’s very confident and will pull up, and also has fadeaways and keg shots.  He plays like he has the ultra-green light, but that’s how he plays overall.  I like his game because he plays with a chip on his shoulder and a lot of heart.  He can pull up from anywhere and will be a good addition to a Division-I team.  He’s a walking 20 points a game-type player, and plays with so much energy, and is very vocal on he court.  He is a true leader as well and it seems the team follows his lead.  He’s not the best defensive player with his feet, but he tries so hard that he looks like one of the best defensive players on the court.

This player is a type of player that makes everything looks so easy, and that he’s not even trying.  He just has that type of swag, but he’s definitely backing all of it up.  What I like about Shemar is that he plays really poised.  He doesn’t go too fast and doesn’t go too slow. He has a good speed that’s under control.  He can hit the three, but is more of a slasher to the rim.  A lanky guard that can finish in almost every way possible - reverse layups, floaters or a dunk.  He’s one of my favorite players in the state.  He’s a lefty that favors his left hand, that can still go right.  He has a good body-type that’s college ready, and I think he can play at a high major and impact a program.  Has good vision and sees the floor.  An excellent defender.  I really like Shemar's game.

Quincy, I feel, did a little of everything this weekend.  He is really good in the open court, and finishing at the rim.  With his wing span and athleticism, he creates mis-matches for other guards.  I have seen him come down the court and pull up in a rhythm from mid-range with a shot that looks very nice.  He has a thin body-type, but his length makes for that.  He has quick hands, but they don’t look quick.  He’s a good utility player I feel that every team can definitely utilize. A well-rounded prospect that will help a program improve in many different ways.